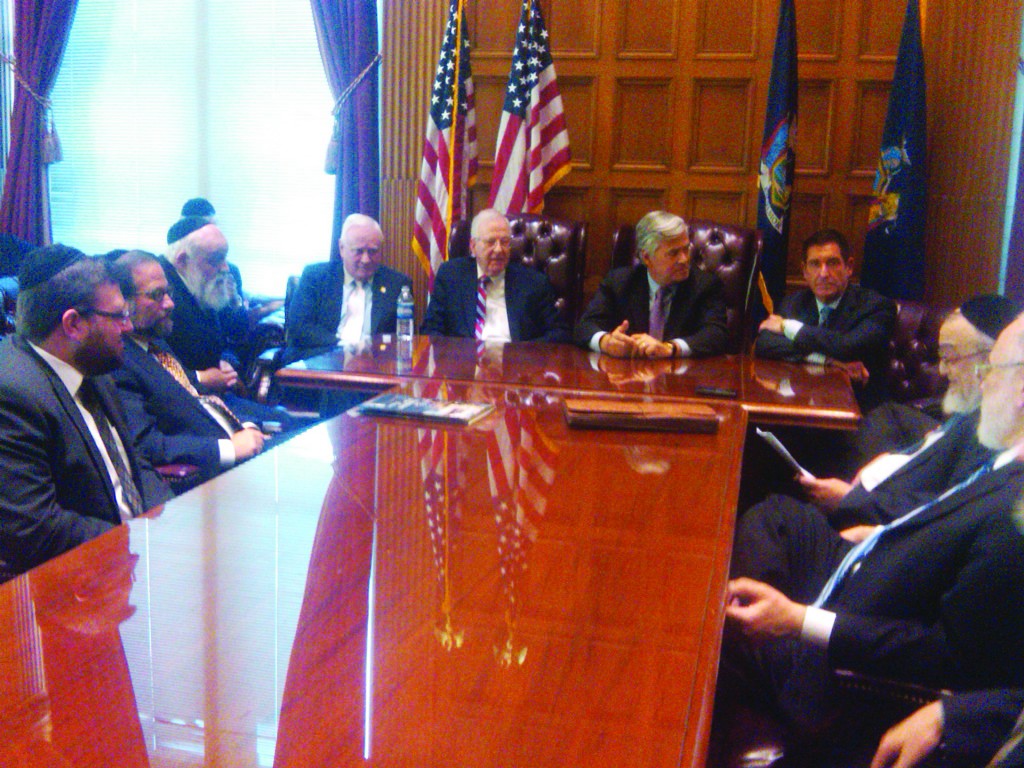 The familiarity displayed yesterday between heads of Jewish organizations and the top leadership of New York State government during Agudath Israel’s annual mission to Albany highlighted their relationship, developed over the years to an extent not even closely paralleled elsewhere.

In a day packed with group meetings and hallway lobbying across the sprawling Capitol building, the group of about 40 representatives of yeshivos and organizations met with the governor’s executive staff, Mr. Silver, the Assembly speaker, and Mr. Skelos, the Senate majority leader, adding a crowd heft to Agudath Israel’s year-round lobbying for yeshivos and klal organizations.

“We are the conscience of the people,” Rabbi Shmuel Lefkowitz, who led the group, told Hamodia. “We fight for issues like special ed … end of life.”

Rabbi Lefkowitz, Agudah’s executive vice president for community affairs, said that the annual trip allows him to show the legislators with whom he deals that their own constituents are behind him, and give him the wind at his back when he says that he represents the half million Jews residing in New York.

“There were groups representing Brooklyn, Queens, Monsey, all over the state,” he said. “Assemblymen and senators look at you differently when you come in to see them with a constituent.”

It was a day of passionate anecdotes aimed at easing the bureaucracy for special education parents, lawyerly expositions on the urgency to patch up end-of-life legislation, and personal pleas to abolish public yellow busing and give the money directly to yeshivos.

“It is not unusual in our community for a family to have five school-age children,” Rabbi Gedalia Weinberger, chairman of Agudah’s board, said in separate addresses to Mr. Silver, Mr. Skelos and the governor’s staff. “Sometimes they have the boys in one bus stop, and the girls at another a few blocks away.”

Rabbi Weinberger said that the state pays about $5,000 to transport each child to school. He said that yeshivos could do the same for less and have door-to-door service.

“This is a safety issue,” he said. “When I was a ten-year-old kid I had no problem walking home by myself. Now, no parent would let their child walk home by [himself].”

Rabbi Lefkowitz said that he wants the state to give $5,000 — or even $4,000 — per child for every yeshivah who wants to take over busing. That would include buses, gas, monitors and a coordinator.

“Give us the money and we’ll be able to provide the transportation at below the [state’s] cost,” he said. “It’s a no-cost issue for the state.”

The group, which included this reporter, met with Mr. Silver in his chamber followed by lunch in the Speaker’s room.

“People spend lots of money for lobbyists to get them an appointment for five minutes six months from now,” Chaskel Bennett, a member of Agudah’s board of trustees, marveled during the program after Mr. Silver left for a swearing-in ceremony. “We were invited to use the Speaker’s office.”

Several speakers encouraged the group, many of whom were in Albany for the first time, to become more active in askanus.

“When you pick up the phone and call an elected official,” Leon Goldenberg, a member of Agudah’s board of trustees, said, “you represent 20 people. When you write a letter you represent 50 people. And when you took off the entire day to come see them, that represents an entire community. That’s the way they look at it.”

“Take a good look at your elected officials to see if they are rising stars,” urged Rabbi Yechiel Kalish, Agudah’s national director for governmental affairs. “Some may become congressmen or senators. One of the members of this room made [the acquaintance] of someone who today is president. Then he was a state senator from Illinois.”

Rabbi Weinberger cautioned that the vast credibility Agudah has in dealing with elected officials is based on the twin attributes of selflessness and trust, as well as a thorough familiarity with the issues.

He said that former Rep. Anthony Weiner (D-N.Y.) told him that the reason he was always willing to help Agudah was, “Number one, you never ask me anything for yourself, just for your community. And number two, you always give me an honest answer.”

Sen. Simcha Felder, who yesterday chaired his first committee hearing as chairman of the newly-created Committee for New York City Education, received a round of applause when he came in.

The group then wrapped up the day at Mr. Cuomo’s executive chamber before heading home.

“Our shtadlanim,” said Rabbi Chaim Dovid Zwiebel, executive vice president of Agudah, “come up to Albany twice a week, three times a week during the budget season, and they try to accomplish for the community. When they see who came up today, it enhances their ability to do their work.”