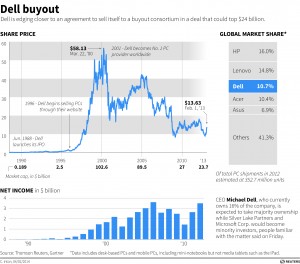 Yum Warns of Profit Decline In 2013

NEW YORK (AP) – Yum Brands reported disappointing fourth-quarter results, and the parent company of KFC, Pizza Hut and Taco Bell expects profit to fall in the year ahead as it deals with concerns over its chicken suppliers in China.

Yum said it expects profit to decline as it works to rebuild consumer confidence. It first warned of troubles late last year after media reports that its suppliers were giving chickens unapproved levels of antibiotics.

WASHINGTON (AP) – U.S. factory orders increased in December even though companies trimmed their orders for goods that signal investment plans.

But demand for core capital goods, a category considered a proxy for business investment plans, dipped 0.3 percent in December following strong gains of 3.3 percent in November and 3 percent in October.

Oracle to Buy Acme Packet For About $2.1 Billion

Acme’s gear is used by more than 1,900 service providers and enterprises around the world. Its technology will complement Oracle’s offerings for telecoms providers, said Citigroup analyst Walter Pritchard.

Oracle, a database software maker based in Redwood City, Calif., will pay $29.25 per share for Acme. That represents a 22 percent premium over the Bedford, Mass., company’s Friday closing stock price. The companies valued the deal at $1.7 billion, net of Acme’s cash.

The shortage of the Johnson & Johnson injectable medication, made under contract by Ben Venue Laboratories, has continued on and off for a few years. It’s resulted in rationing, with some patients with ovarian and other cancers getting less-effective care, and disrupted studies testing Doxil against possible new treatments.

WASHINGTON (AP) – The government is expected to file civil charges against Standard & Poor’s Ratings Services, alleging that it fraudulently gave high ratings to mortgage debt that later plunged in value and helped fuel the 2008 financial crisis.

The charges would mark the first enforcement action the government has taken against a major rating agency involving the financial crisis.

S&P said Monday that the Justice Department had informed it that it intends to file a civil lawsuit focusing on S&P’s ratings of mortgage debt in 2007. The action does not involve any criminal allegations.

This article appeared in print on page 8 of the February 5th, 2013 edition of Hamodia.