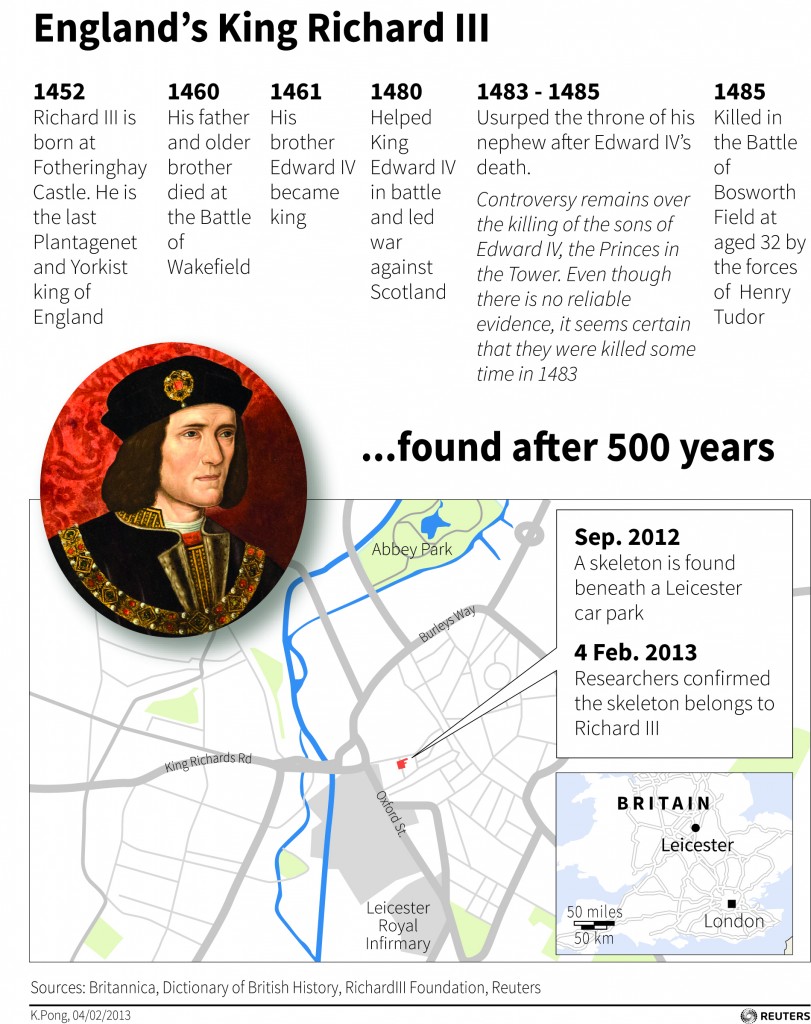 A skeleton with a cleaved skull and a curved spine dug up from under a car park is that of Richard III, archaeologists said on Monday, solving a 500-year-old mystery about the final resting place of the last English king to die in battle.

In one of the most significant archaeological finds of recent English history, a team from the University of Leicester said evidence showed a skeleton found last year in excavations of a mediaeval friary under a city car park was that of Richard.

The skeleton had 10 wounds, eight of them to the head, clearly inflicted in battle and suggesting the king had lost his helmet. The skull showed a blade had hacked away part of the rear of the skull. A metal fragment was found in the vertebrae.

The victor, the future King Henry VII, had Richard’s body exposed to the people of Leicester to show the battle was won, ending the bloody 30-year civil conflict known as The Wars of the Roses between the houses of York and Lancaster.

Confirmation the bones were Richard’s hinged on DNA taken from the skeleton matching that of Michael Ibsen, a Canadian-born furniture maker in London who genealogists said was the direct descendant of Richard’s sister, Anne of York.

There was also a DNA match with another unidentified descendant of Anne of York who wished to remain anonymous. The genetic match was especially significant as it was a rare type of DNA found in only a few percent of the population, said Turi King, a geneticist at the university.

“It’s really difficult to come to grips with the fact that there is some part of you that is part of somebody as famous or infamous as Richard III,” Ibsen said in an interview.

Unlike his medieval ancestor, Ibsen said he did not plan to put forward his family’s claim to the throne: “I think our chances are long gone.” Buckingham Palace declined comment on the importance of the discovery, which is expected to increase interest in Richard and bring more visitors to Leicester.

The remains of the king were put on display on a black velvet cloth encased in a glass box for the media and other guests in a small room with a worn red carpet that is part of the University of Leicester’s library.

While the findings may solve the mystery about the whereabouts of the grave of Richard, the last Plantagenet king of England remains a complex figure whose life, made famous by Shakespeare’s history play, deeply divides opinion.