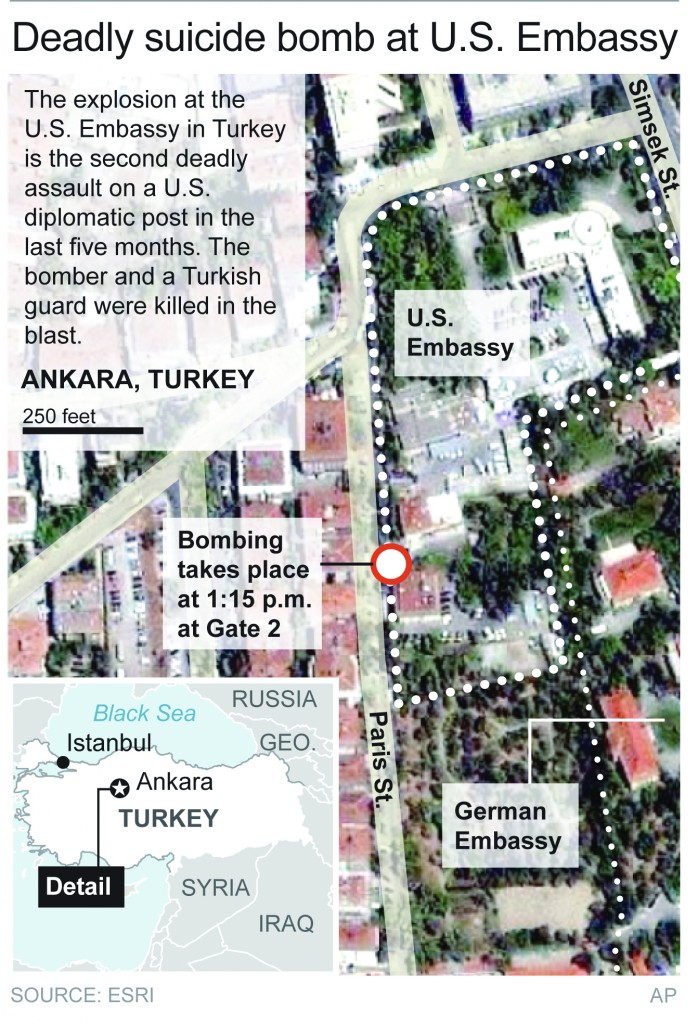 The suicide bomber who struck the U.S. Embassy in Ankara spent several years in prison on terrorism charges but was released on probation after being diagnosed with a hunger strike-related brain disorder, officials said Saturday.

The bomber, identified as 40-year-old leftist terrorist Ecevit Sanli, killed himself and a Turkish security guard on Friday, in what U.S. officials said was a terrorist attack. Sanli was armed with enough TNT to blow up a two-story building and also detonated a hand grenade, officials said.

Turkish Prime Minister Recep Tayyip Erdogan said Friday that police believe the bomber was connected to his nation’s outlawed leftist terrorist group Revolutionary People’s Liberation Party-Front, or DHKP-C. And on Saturday DHKP-C claimed responsibility for the attack in a statement posted on a site linked to the group; it said Sanli carried out the act of “self-sacrifice” on behalf of the group.

The group called itself “immortal” and said, “Down with imperialism and the collaborating oligarchy.” But it gave no reason for attacking the U.S. Embassy. The authenticity of the site was confirmed by a government terrorism expert who spoke on condition of anonymity in line with rules that bar government employees from speaking to reporters without authorization.

Turkey’s NTV media, meanwhile, said police detained three people on Saturday who may be connected to the U.S. Embassy attack during operations in Ankara and Istanbul. Two of the suspects were being questioned by police in Ankara, while the third was taken into custody in Istanbul and was being brought to Ankara.

NTV, citing unidentified security sources, said one of the suspects is a man whose identity Sanli allegedly used to enter Turkey illegally, while the second was suspected of forging identity papers. There was no information about the third suspect.

Sanli’s motives remained unclear. But some Turkish government officials have linked the attack to the arrest last month of dozens of suspected members of the DHKP-C group.

Speculation also has abounded that the bombing was related to the perceived support of the U.S. for Turkey’s harsh criticism of the regime in Syria, whose brutal civil war has forced tens of thousands of Syrian refugees to seek shelter in Turkey. But Prime Minister Erdogan has denied that.

Friday’s attack came as NATO deployed six Patriot anti-missile systems to protect its ally Turkey from a possible spillover from the civil war raging across the border in Syria. The U.S., Netherlands and Germany are each providing two Patriot batteries.