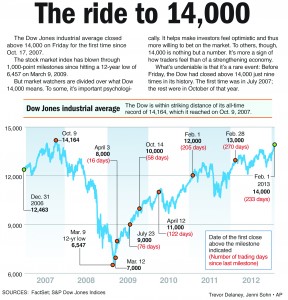 The Dow closed above 14,000 on Friday for the first time in more than five years.

It was just a number on a board, but it was enough to raise the hopes of some investors and cause others concern about an overheated market. And it brought reminders of a different era, back before the financial crisis rocked the world economy.

The Dow Jones industrial average, a stock market index that is traditionally considered a benchmark for how the entire market is faring, had been rising fairly steadily for about a month. On Friday, strong auto sales and optimism about U.S. job growth pushed it over the mark. The Dow is now just 155 points away from its record close.

But market watchers were divided over what the Dow milestone — or even what a potential new all-time high — really means. To some, it’s an important booster to hearts and minds, making investors feel optimistic and thus more willing to bet on the market.

And those investors, until recently, had been shying away from stocks. Since April 2011, investors have pulled more cash out of U.S. stock mutual funds than they’ve put in, according to the Investment Company Institute. In the past three weeks, though, that trend has reversed, which could make January the first month in nearly two years where stock-focused funds had a net inflow.

For the average investor, that was all back when the stock market still seemed like a party. Housing prices were starting to ebb but hadn’t cratered. Jobs were abundant, with unemployment at 4.7 percent — compared to 7.9 percent now. Lehman Brothers still existed. So did Bear Stearns, Wachovia and Washington Mutual.

The government jobs report that pushed stocks forward was mixed, but traders chose to focus on the positive. The U.S. said it added 157,000 jobs in January, which was in line with expectations. Unemployment inched up to 7.9 percent from 7.8 percent in December. Many economists, though, were encouraged because the government now says that hiring over the past year was higher than originally thought.

This article appeared in print on page 8 of the February 4th, 2013 edition of Hamodia.