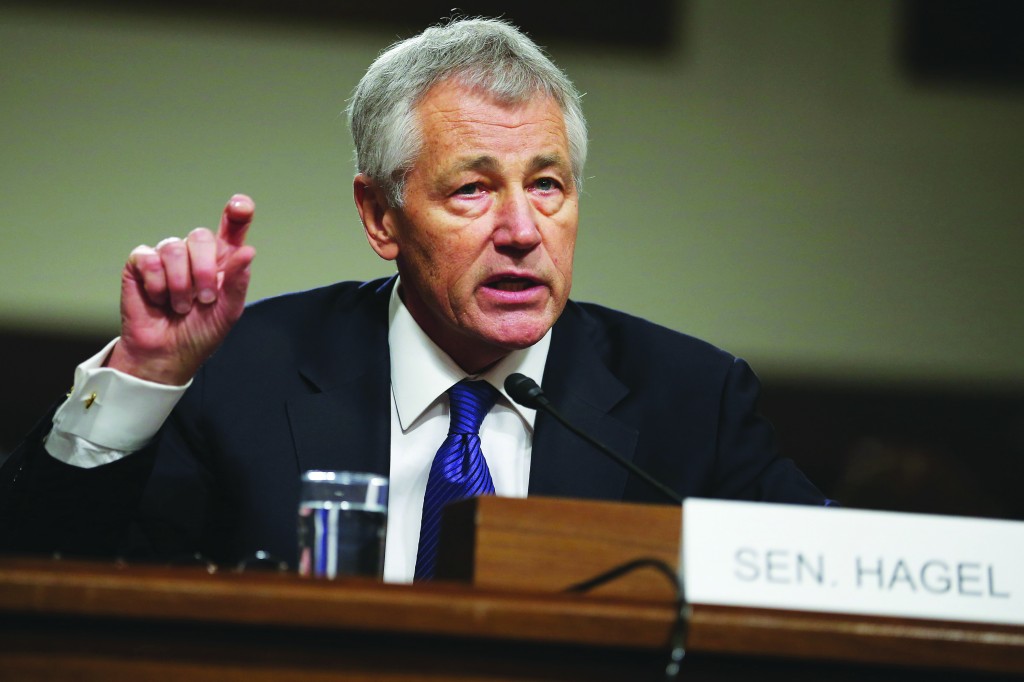 Republican senators hammered former GOP senator Chuck Hagel at his confirmation hearing Thursday on issues ranging from Israel and Iran to his support for a group that advocates the elimination of nuclear weapons. But with most Democrats in his corner, an unflustered Hagel seems headed for approval as defense secretary.

Hagel, a former two-term senator from Nebraska, described his views as mainstream and closely aligned with those of President Barack Obama, the Democrat who nominated him. But several GOP members of the Armed Services Committee sought to portray him as radical and unsteady. Sen. Deb Fischer (R-Neb.) called his ideas “extreme” and “far to the left” of Obama.

Hagel said he believes America “must engage, not retreat, in the world,” and insisted that his record is consistent on that point.

He pointed to Iran and its nuclear ambitions as an example of an urgent national security threat that should be addressed first by attempting to establish dialogue with Iranian rulers, although he said he would not rule out using military force.

“I think we’re always on higher ground in every way — international law, domestic law, people of the world, people of the region to be with us on this — if we have … gone through every possibility to resolve this in a responsible, peaceful way, rather than going to war,” he said.

McCain suggested that Hagel and his critics were not quibbling over small matters.

“They are not reasonable people disagreeing; they are fundamental disagreements. Our concerns pertain to the quality of your professional judgment and your world-view on critical areas of national security,” he said.

McCain pressed Hagel on whether he was right or wrong about his opposition to President George W. Bush’s decision to send an extra 30,000 troops to Iraq in 2007 at a point when the war seemed in danger of being lost. Hagel, who voted to authorize military force in Iraq, later opposed the conflict, comparing it to Vietnam and arguing that it shifted the focus from Afghanistan.

“Were you right? Were you correct in your assessment?” McCain asked.

“I would defer to the judgment of history to sort that out,” Hagel said as the two men talked over each other.

“The committee deserves your judgment as to whether you were right or wrong about the surge,” McCain insisted.

Unable to elicit a simple response, McCain said the record should show that Hagel refused to answer. And he made it clear that he would have the final word — with his vote, which he said would be influenced by Hagel’s refusal to answer yes or no.

“I think history has already made a judgment about the surge, Sir, and you’re on the wrong side of it,” he said.

Responding to criticism from outside GOP-leaning groups, Hagel repeated his regrets about using the term “Jewish lobby” to refer to pro-Israel groups. He said he should have used another term and should not have said those groups have intimidated members of the Senate into favoring actions contrary to U.S. interests.

“I’m sorry and I regret it,” Hagel said. “On the use of ‘intimidation,’ I should have used ‘influence,’ I think would have been more appropriate.”

At one point, Hagel mistakenly said the Obama policy toward Iran is “containment” even though the former senator has said all options, including military force, should be on the table. He was handed a note and corrected himself.

Hagel was the lone witness in a jam-packed hearing room at a session that could be crucial in determining whether he will win Senate confirmation and join Obama’s second-term national security team. He spoke out forcefully for a strong military while trying to explain 12 years of Senate votes and numerous statements.