U.S. Eyes Drone Base in Africa With Al-Qaida in Mind

Plans to base unarmed American surveillance drones in the African nation of Niger highlight the Obama administration’s growing concern about extremist influences in the volatile region. They also raise tough questions about how to contain al-Qaida and other terrorist groups without committing U.S. ground forces in yet another war.

In the short run, a drone base would enable the U.S. to give France more intelligence on the terrorists its troops are fighting in neighboring Mali. Over time it could extend the reach not only of American intelligence gathering but also U.S. special operations missions to strengthen Niger’s own security forces.

The U.S. and Niger in recent days signed a “status of forces agreement” spelling out legal protections and obligations of U.S. forces that might operate in Niger in the future.

Pentagon spokesman George Little acknowledged the agreement, but declined Tuesday to discuss U.S. plans for a military presence in Niger.

“They expressed a willingness to engage more closely with us, and we are happy to engage with them,” Little said, adding that the legal agreement was months in the making and is unrelated to the recent fighting in Mali. 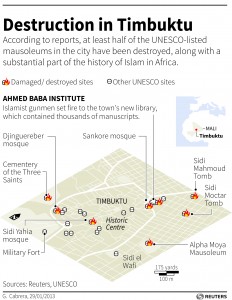 The U.S. has found some of its efforts to fight extremists hobbled by some African governments, whose own security forces are ill-equipped to launch a U.S.-style hunt for the terrorists, yet are reluctant to accept U.S. help because of fears the Americans will overstay their welcome and trample their sovereignty.

At France’s request, the U.S. has flown 17 Air Force transport flights to move French troops and their equipment to Mali in recent days, Little said. U.S. aircraft also are conducting aerial refueling French fighter jets based in Mali, he said, and those operations will continue.

Other U.S. officials said the Pentagon is planning a new drone base in northwestern Africa — most likely in Niger — but the plans are not yet complete. It would provide more extended U.S. aerial surveillance of militants in the region without risking the loss of air crews. The main U.S. drone base in Africa is in Djibouti in East Africa.

Africa is increasingly a focus of U.S. counterterrorism efforts, even as al-Qaida remains a threat in Pakistan, Yemen and elsewhere. The recent terrorist attack on a natural gas complex in southeastern Algeria, in which at least 37 hostages and 29 terrorists were killed, illustrated the threat posed by extremists who have asserted power propelled by long-simmering ethnic tensions in Mali and the revolution in Libya.

This article appeared in print on page D3 of the January 30th, 2013 edition of Hamodia.