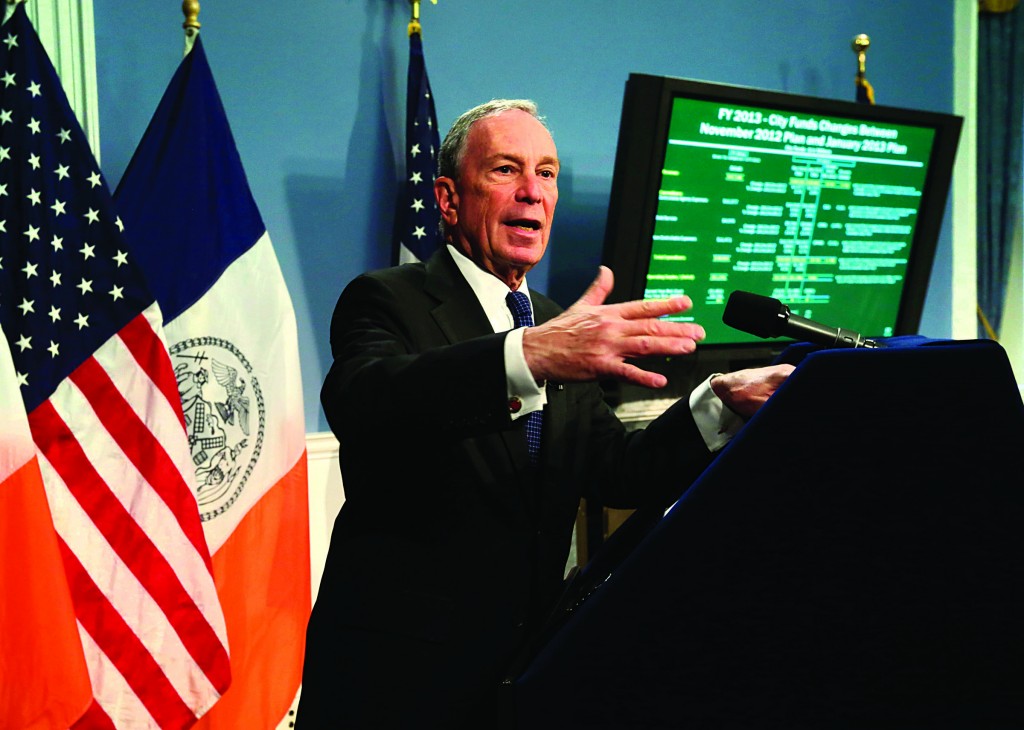 New York City Mayor Michael Bloomberg on Tuesday proposed a $70.1 billion budget for fiscal 2014, his last as mayor, that closes a $1.1 billion deficit without tax hikes or lay-offs.

The mayor’s proposed operating budget calls for the city to spend $50.7 billion in fiscal 2014 on fire, police, health, education, pension and healthcare costs.

Of that, expenditures over which the city has control would drop 1.1 percent, or $254 million, next year from the current fiscal year, which ends on June 30.

But those reductions, the 12th in a row under Bloomberg’s long-running plan to shrink city agency spending, would be eroded by a $1.8 billion, or 6.8 percent, bump in mandated costs, to $29.1 billion in fiscal 2014. In particular, costs for employee fringe benefits — mostly healthcare — will rise 7.5 percent to just over $7 billion. Debt service payments will increase 6.7 percent to about $6 billion, and the city’s pension contributions are set to rise 1.9 percent to nearly $8.1 billion.

New York City has netted $6.5 billion in agency reductions since 2008, but “all of the savings have gotten used up” by rising healthcare, debt service and pension costs, and because the city is increasingly funding a larger portion of public school costs, Bloomberg said at a press conference.

The budget is the last one Bloomberg, a political independent, will present to city lawmakers before his third and final term expires at the end of this year.

Next year’s gap would be closed in part by rolling over a $500 million cushion the city set aside this year for legal claims, and a $200 million rollover from the city’s reserve fund.

Bloomberg’s plan also would reduce the number of New York City teachers by 1,800 in fiscal 2014 through attrition, the result of the potential loss of $474 million of state aid next year because the city and teachers’ union have so far failed to agree on a system to evaluate teacher performance.

That would come on top of $250 million in lost state funding for the current fiscal year.

“The suffering is more than worth it to maybe finally get an evaluation deal that will let us put only the best teachers in front of our kids,” Bloomberg said.

A 2010 state law tied education funding to teacher evaluations. About 99 percent of school districts in New York state have complied with the new law.

Bloomberg took office in January 2002, presenting his first city budget just after the attacks of September 11.

Eleven years later, he is presenting his final budget just months after deadly Superstorm Sandy swept through the region, causing widespread damage to power, transportation and water systems and damaging hundreds of thousands of homes in the region.

Of an estimated $4.5 billion in storm-related costs, the city is already paying for $1.4 billion in emergency costs. The remainder will be allocated in the city’s long-term capital plan. Eventually, the city expects federal funding to cover the $4.5 billion tab.

Bloomberg plans on handing his successor a city government with fewer employees. During his time in office, the city will have reduced full- and part-time positions by more than 18,200, to about 293,500, according to his budget proposal.

The next mayor could also face a shortfall of $1.7 billion, or 3.1 percent of expected city revenues, in fiscal 2015, according to projections by the New York City Independent Budget Office.

If the city — whose public schools are controlled by the mayor — cannot reach a deal with the United Federation of Teachers by a September 1 deadline, the next mayor could be permanently stuck with a smaller pot of money for education.

Some other revenues and expenditures are also still uncertain.

The city had been hoping to bring in $790 million from the sale of taxi medallions. But Bloomberg’s proposed budget reduced the expected revenue by $190 million to $600 million because the sale is tied up in litigation.

Bloomberg’s budget also has not set aside money for a possible settlement in ongoing negotiations with organized labor. Nearly all of the city’s unions have been working without a current contract. The teachers’ contract ran out in October 2009.

Under one settlement scenario, the city could owe wages and back pay of more than $5 billion through June 2013, the IBO has said.