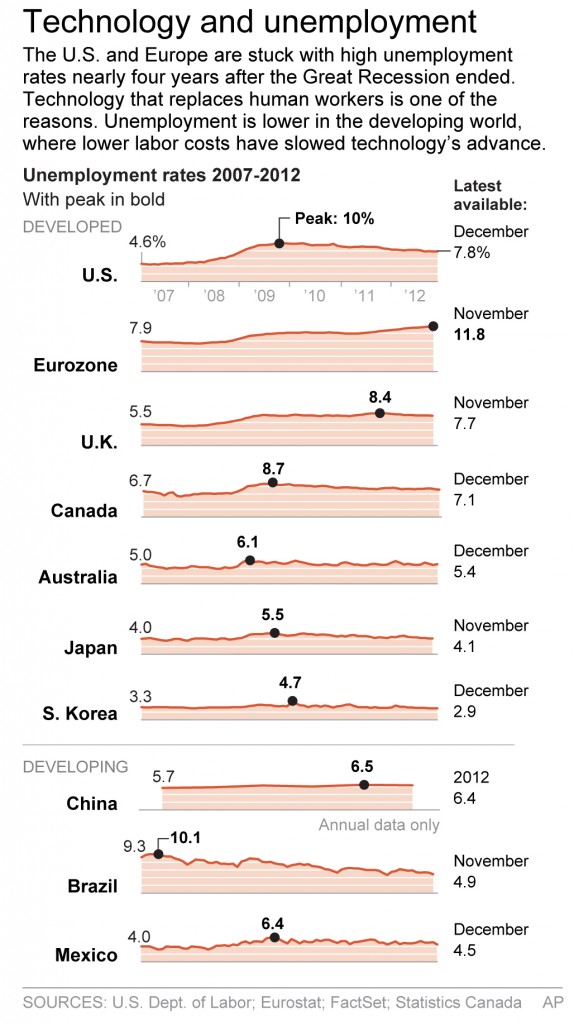 To workers being pushed out of jobs by today’s technology, history has a message: You’re not the first.

From textile machines to the horseless carriage to email, technology has upended industries and wiped out jobs for centuries. It also has created millions of jobs, though usually not for the people who lost them.

“People suffer – their livelihoods, their skills and training are worth less,” says Joel Mokyr, historian of technological change at Northwestern University. “But that is the price we pay for progress.”

A look at breakthroughs that made the goods we buy more affordable, our lives more comfortable – and our jobs more precarious:

For most of history, people made many goods themselves. That changed with the First Industrial Revolution, which began in England in the mid-18th century and lasted for about 100 years.

New mechanical devices that allowed one man to do the work of several flooded the market with products, most notably textiles. Using cords, wheels and rollers, inventors sped up the twisting of threads to make yarn and the weaving of yarn to make cloth.

Next, steam was used to free the new machines from the limits of man’s muscle and make them run faster. The new machines produced so much, so fast and so cheaply, more people could afford to buy textiles. Demand soared and so did jobs manning the machines and doing other work.

In America in 1793, Eli Whitney freed slaves from the laborious work of picking sticky seeds from cotton bolls by inventing a cotton gin that did that automatically. It led to widespread planting of cotton – but even more work for slaves.

Whitney also is credited with another invention: interchangeable parts. At a workshop he ran for making firearms, he had his staff make the same part many times so that his guns could be assembled quickly. It worked, and industries such as watch makers copied his method.

In 1831, Cyrus McCormick invented a reaper that cut wheat stalks as it was pulled by horses and piled them on a platform. Farmers could harvest faster.

In 1837, John Deere stuck the blade of a steel saw onto a plow and invented the steel-edged plow to replace cast-iron ones. Farmers could cut a furrow in the earth more easily and sow faster.

And so began a series of inventions that made farming efficient, as it began to drain farms of people. In 1800, two-thirds of Americans worked on farms; today, two percent do.

Life sped up more in this second period of innovation, from the mid-19th century to the early 20th century, an age of steel and electric power, expanding railroads and the invention of the  automobile.

In 1856, an Englishman discovered a way of making steel fast and cheap, and other inventors soon improved the process. Railroad companies started using steel for their rails instead of wrought iron, which bent easily and needed to be replaced often. Trains could now carry heavier loads, which meant businesses could send more products to distant markets. Sales increased, and so did jobs.

In 1861, a telegraph line was strung from coast to coast in the U.S., vastly improving communication. It also wiped out the Pony Express delivery service, which went out of business that same year.

In 1879, Thomas Edison made a light bulb that wouldn’t burn out in a few hours. Factories replaced gas lights, reducing the number of fires.

In quick succession came a string of breakthroughs – the automobile, an automatic typesetting machine for printing, a tractor propelled by an internal combustion engine instead of pulled by horses and the Wright brothers’ airplane.

Henry Ford started his eponymous car company in 1903. He put men and their tools in stationary positions and had a car being assembled roll from one man to the next. The moving assembly line was born, enabling cars to be made faster and cheaper. As had happened in the  textile industry earlier, car prices plummeted and demand soared, creating new kinds of jobs in a new industry – and helping to wipe out 100,000 jobs for carriage and harness makers.

The inventor’s focus shifted from building things to manipulating information. The tools of this current period help people gather and analyze data and communicate in ways that are faster, cheaper, and better.

No invention is commonly accepted as first of the age, but one contender is the first digital computer in 1937, created by George Stibitz of Bell Labs, former research arm of AT&T. Stibitz seized the idea of using the open and closed positions of metallic devices, when electricity runs through them, to do simple math.

In 1947, a team at Bell Labs led by William Shockley discovered how to switch and amplify electronic signals using semiconductor material. It was the first transistor. A decade later, many of them were crammed onto a small chip, dubbed an integrated circuit.

Before the transistor, electronic products worked with bulky vacuum tubes. Now computing power could be miniaturized, a breakthrough that led to small radios, personal computers, cellphones and an array of other devices today.

In 1971, the first email message  was sent by a Defense Department computer engineer.

The same year, John Blankenbaker built the Kenbak-1, the first computer small and cheap enough for the masses to buy. They didn’t. Fewer than 50 Kenbak-1s were sold, mostly to a community college, according to an oral history presented by Blankenbaker at the Computer Museum in Boston. His company went out of business within two years.

In 1981, the National Science Foundation set up a network linking university computers, a milestone in the development of the Internet. Its impact could scarcely be imagined at that time.

The past three decades, new products and innovations have allowed people to entertain and inform themselves anywhere, anytime.

In 1983, Motorola introduced the first portable cellphone, a 2-pound clunker called the DynaTac 8000x. In 1984, the first PDA, or personal digital assistant, was sold – the long-forgotten Psion. In 1994, BellSouth sold its first Simon, the start of a stream of ever-smarter smartphones from which you can access virtually any information while on the run, including that staple of the telephone operator – a phone number.

A job that rose in the same period? Software engineer. These professionals numbered 1.03 million in 2010, up nearly 40 percent.