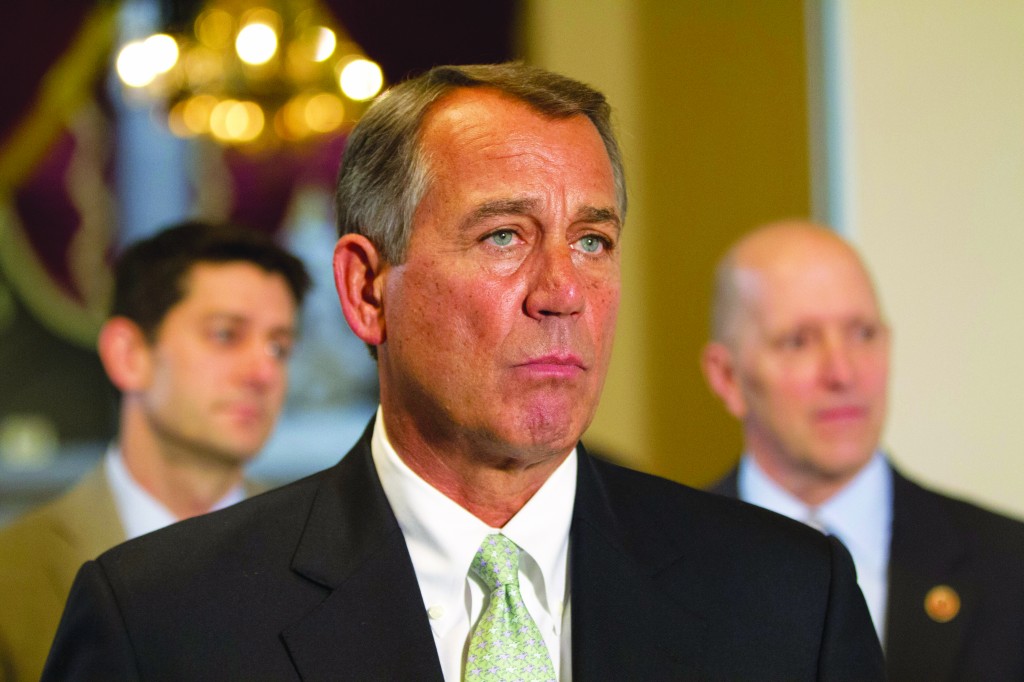 Retreating with a purpose, Republicans sped legislation through the House on Wednesday to avert the imminent threat of a government default but pointing the way to a big springtime budget struggle with President Barack Obama. The fight to come will focus on steps to wring enormous savings from Medicare, farm subsidies and other benefit programs.

The current legislation, which cleared the House on a bipartisan vote of 288-144, would permit Treasury borrowing to exceed the limit of $16.4 trillion through May 18. It passed as Speaker John Boehner pledged that Republicans will quickly draft a budget that would wipe out deficits in a decade and challenged Democrats to do the same.

The Democratic-controlled Senate is expected to approve the debt bill quickly. The White House welcomed the legislation rather than face the threat of a first-ever default at the dawn of the president’s second term in the White House, and spokesman Jay Carney pointedly noted a “fundamental change” in strategy by the GOP.

House Republicans cast the bill as a way to force the Senate to draft a budget for the first time in four years, noting that if either house fails to do so, its members’ pay would be withheld. They called the bill “no budget, no pay,” a slogan if not a statement of fact, since lawmakers would be entitled to collect their entire salaries at the end of the Congress with or without a budget in place.

With polls showing their public support eroding, the Republicans jettisoned, for now at least, an earlier insistence that they would allow no additional borrowing unless Obama and the Democrats agreed to dollar-for-dollar federal spending cuts in exchange.

Rep. Paul Ryan, the Wisconsin lawmaker who will be responsible for drafting the budget for Republicans, said Congress has “a moral obligation” to prevent a debt crisis that he said will hit hardest at seniors and others who depend on government the most.

As chairman of the House Budget Committee, Ryan will take the lead role in crafting a blueprint expected to rely heavily on savings from benefit programs. The budget he wrote last year before being picked as the party’s vice presidential candidate was to take two decades to achieve balance.

Ryan’s 10-year-budget task will be eased in part by higher tax revenues resulting from the Jan. 1 expiration of a two-year payroll tax cut, and in part from an anticipated $600 billion generated by raising rates on upper incomes. But given the sheer size of annual deficits in the $1 trillion range, it will be impossible to meet his goal without taking large savings from benefit programs such as Medicare and Medicaid, farm and student loan subsidies, the federal retirement program and more.

The congressional calendar requires the House and Senate to approve versions of a budget by early spring. Assuming that happens, the two are then reconciled, and the resulting compromise sets the framework for spending and tax legislation for the fiscal year that begins on Oct. 1.

The president’s signature is not required on the budget itself, but legislation that attempts to carry it out goes to him for his approval or veto.

Republicans hope public sentiment will strengthen their hand for negotiations with the White House on those bills, although there are earlier chokepoints they hope to exploit as well. In particular, across-the-board spending cuts are to take effect beginning March 1, and it is something of an article of faith among many GOP lawmakers that the president would rather agree to an alternative that targets savings.

Also, funding for most of the government expires on March 27, giving conservatives yet another chance to try and reduce overall spending. That strategy is not without considerable risk, though. Republicans suffered grievous political damage in the mid-1990s when they engineered a pair of government shutdowns in a battle with President Bill Clinton over spending.