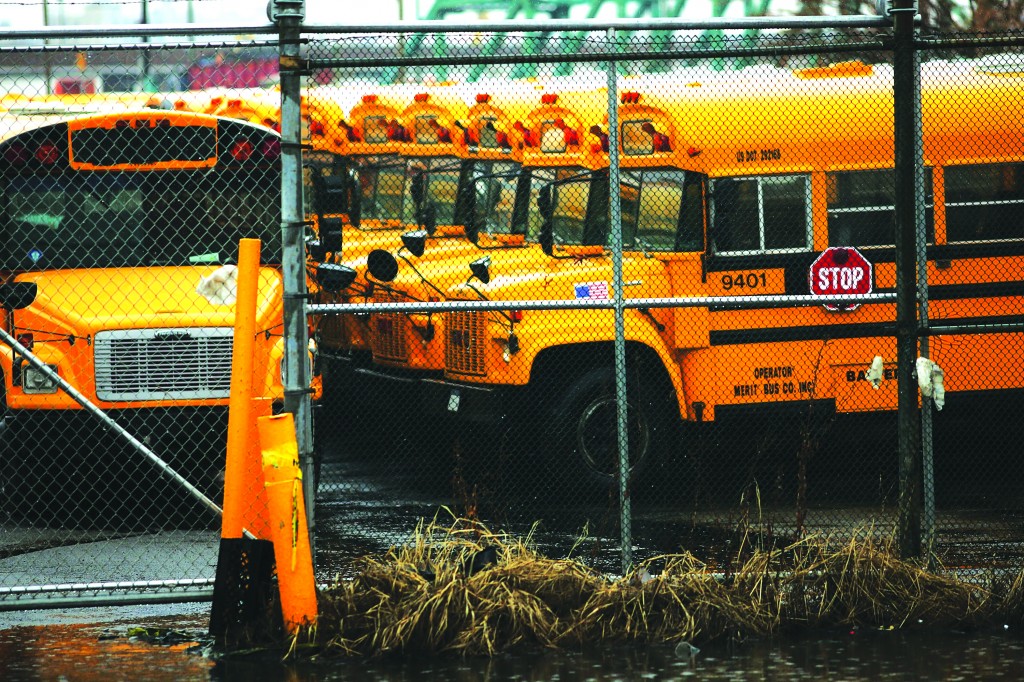 New York City students heading to school got through one more day without school-bus drivers and aides as the city’s school-bus strike wrapped up its fourth day Tuesday.

The National Labor Relations Board, which was called in last week by bus company owners who lodged a complaint with the government agency, was due to hear arguments beginning Tuesday to examine the legality of the strike.

If the strike is ruled illegal, the NLRB could order drivers and matrons back to work right away.

At the center of the conflict is the city’s need to reduce spiraling costs versus the bus drivers’ goal of keeping their jobs. The city, which contracts with private bus companies, says it must seek competitive bids to save money. Local 1181 of the Amalgamated Transit Union wants the new contracts to include job protections for current drivers.

The New York City Department of Education said 2,320 bus routes out of 7,700 were operating; those with drivers who are not members of Local 1181. Students affected by the strike are excused for up to two hours of delayed travel time, and if a student is unable to make it to school due to the strike, educational materials for every grade and core subject are available online.

The Regents exams, scheduled from January 22–25, impact a small number of students who are also affected by the strike. All students are urged to make every effort to get to the exam and parents must contact the school in advance of the scheduled exam if a student is not able to get to school to take the test.

“In the Jewish world, people are devoted and somehow, some way, they bring their kids to school,” remarked Rabbi Moshe Ausfresser of the Office of Pupil Transportation. On Monday he surveyed yeshivos  and found that most of the students are coming.

However, not everyone can manage the costs up front. Chancellor Dennis Wolcott approved additional transportation options for families facing financial hardship that will cover the up-front costs of transportation for students with disabilities who are unable to use public transportation.

To assist these families, the DOE will pay, at the parent’s direction, private transportation providers such as a taxis or car services, so that parents do not have to advance the cost of transportation out-of-pocket.

This option is only available — at the parent’s request — for families of students who have specialized transportation on the IEP, who are unable to use public transportation, and whose parents, as determined by the principal, cannot cover the up-front costs of a private transportation provider.

On Monday and Tuesday Rabbi Moshe Ausfresser was in touch with yeshivos with special ed students to find out which students were not coming to school because of the strike. He was able to solve quite a few of those cases enabling as many special ed children as possible to get to school.

The strike brings to the forefront another element of yeshivah travel altogether. Councilman David Greenfield has advocated for a transportation voucher program for parents of private and public school children since he first ran for office in 2010, and Councilman Lew Fidler has staunchly supported those efforts. Yesterday they renewed their call for New York City to institute a year-round transportation voucher program to help reduce the cost of pupil transit and improve services for students based on their school’s specific schedule.

They say this would allow parents to choose a bus service that best fits their child’s needs and schedule, including door-to-door pick-up and drop-off and extended school hours.

“Since the DOE has sent school bus contracts out for competitive bidding, now would be the appropriate time to look into at least a pilot program for yeshivah school busing,” stated Councilman Fidler. “The existing contract structure does not work well for yeshivos. The program that David and I have suggested would improve service and save taxpayers’ money at the same time.”