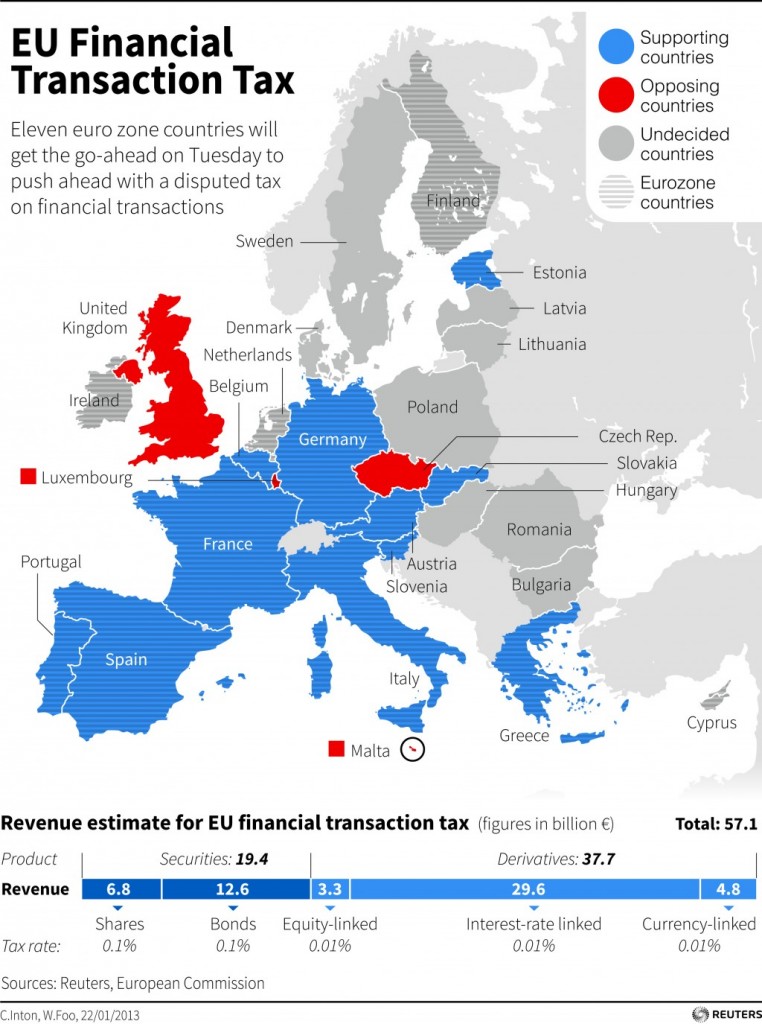 Pressing ahead where others have balked, 11 European countries received the green light Tuesday to plan a financial transaction tax that could generate billions of dollars in revenue for cash-strapped governments.

Led by Germany and France, the European Union’s two heavyweights, the nations will now work out how to introduce a levy on the buying and selling of stocks and bonds and on the use of complex financial instruments known as derivatives.

Advocates say such a tax is not only necessary to discourage risky transactions like those that precipitated the 2008 global financial meltdown but also a fair way to make financial institutions pay to help clean up the leftover mess.

The move is a controversial one. The U.S., at the urging of Wall Street, has opposed a financial transaction tax; so has Britain, which is home to Europe’s largest financial trading hub.

Hesitation in London as well as some other European capitals stalled a proposal, made in September 2011, to charge a unified financial transaction tax across the 27-nation EU. The 11 countries, all of which share the euro as their currency, decided to forge ahead on their own, deepening integration among a subset of EU members that together account for more than half of the region’s economic output.

It is only the third time the EU has invoked a provision allowing a limited number of members to act in concert without the rest of the bloc (although the other members’ approval is needed) and the first time such a move has focused on tax policies. Algirdas Semeta, EU tax commissioner, told reporters Tuesday that the decision represented a “major milestone.”

Just how much money a financial transaction tax would produce for the 11 participating nations is unclear. EU-wide, officials had estimated that a levy of just 0.1 percent on trades of stocks and bonds and 0.01 percent on derivatives could bring in $75 billion a year.

Funds from the tax could help shore up struggling banks, which have been hit hard by the ongoing euro debt crisis. The money could also ease the pressure on European governments that have had to rescue some of those banks at taxpayer expense while at the same time drastically slashing public spending to bring down their budget deficits.

Wolfgang Schaeuble, the German finance minister, said it was only fair for financial institutions to take on some of the burden of resolving a global crisis brought on by their own risky practices.

“The financial sector must appropriately participate in bearing the cost of the financial crisis,” Schaeuble said in a statement.

Besides France and Germany, the countries participating in the proposed tax are Belgium, Estonia, Greece, Spain, Italy, Austria, Portugal, Slovenia and Slovakia. Two of those nations, Greece and Portugal, have had to seek international bailouts.

British officials have said a financial transaction tax would be in their nation’s interest only if it were adopted globally, the prospect of which is virtually nonexistent. A Europe-only levy, they say, would unfairly hurt London’s financial sector, which forms a large part of the British economy.

Tuesday’s advance by the 11 countries comes a day before British Prime Minister David Cameron is to deliver a landmark speech outlining his vision of a new relationship between his country and the EU.

Many Britons are skeptical of the drive to further integrate European countries under the supervision of the EU in Brussels. Cameron is expected to express his support for Britain’s continued membership in the EU but on new terms that he would put to the British public in a national referendum.