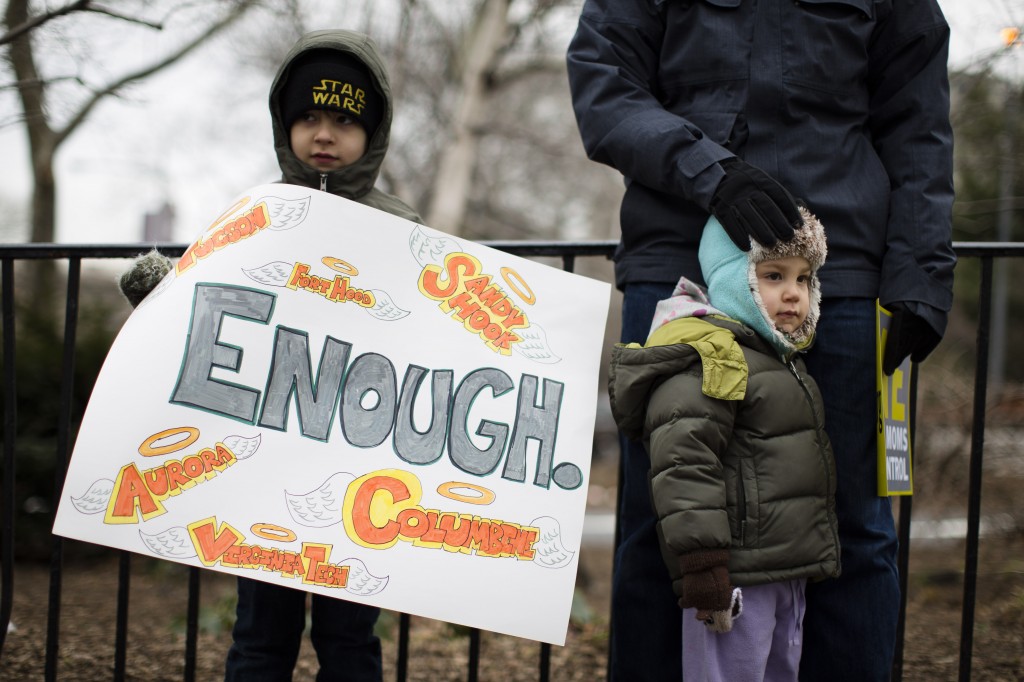 A gun control group marched across the Brooklyn Bridge to City Hall on Monday to call on Congress to follow New York’s lead and enact stricter limits on weapons and ammunition purchases.

One Million Moms for Gun Control said the event was inspired by the Rev. Martin Luther King Jr.’s message of nonviolence.

Some 400 marchers from the city’s five boroughs and several other states, including Michigan, Minnesota and Florida, crossed the bridge.

Valerie Wright of Manhattan said she would have felt “negligent” if she didn’t attend.

“Even though we just passed legislation here, it’s more far reaching than just our state,” she said.

Wright said it was important to be counted in the call for similar laws nationwide. “Sometimes showing up is the best thing you can do,” she said.

Jennifer Edwards, from Ann Arbor, Mich., said she was not against guns, but wants a nationwide ban on military-style guns.

“If the man at Sandy Hook had a regular gun instead of an assault weapon, half of those children would be alive,” she said of the Newtown, Conn., tragedy. “You can never stop people from doing crazy things, but if you can minimize it, if you can save one life, isn’t it worth it?”

One Million Moms for Gun Control wants Congress to pass President Barack Obama’s sweeping gun control proposals. Those include a ban on assault weapons and large magazines and closing loopholes that allow some gun sales without background checks. The group also is pushing for boundaries on how much ammunition can be purchased and limits on the scope of concealed weapons laws.

The march ended with comments from Shannon Watts, the group’s founder, thanking those who marched through the frigid morning and imploring them to keep the pressure on to get national laws passed.

Watts said she envisions the group modeling itself after Mothers Against Drunk Driving, and hopes to lead a fight nationwide with rallies planned for next week in Washington and other cities.

She acknowledged that others have fought the issue before, but said that the elementary school shooting was a turning point.

“This is a new generation of moms,” she said.

Indeed, many in the crowd said they were galvanized by Newtown. Rachael Dubin, of Brooklyn, said she had never been involved in previous efforts to enact stricter gun laws, but the shootings were too close to home for the mother of a 2-year-old and a 5-year-old.

“It’s the 5-year-old that really made what happened in Newtown so jarring,” she said. “I think there absolutely needs to be national legislation, and I hope it’s tougher than what was done in New York state.”

Several members of the City Council, state Assembly and Senate joined the rally. Among them was Police Commissioner Ray Kelly, who has long called for stricter gun laws. He called the event a manifestation of the growing momentum for change. The commissioner said tighter laws on assault weapons are a start, but also added that handguns are used in most of the crimes within the city — most of them brought into New York illegally.