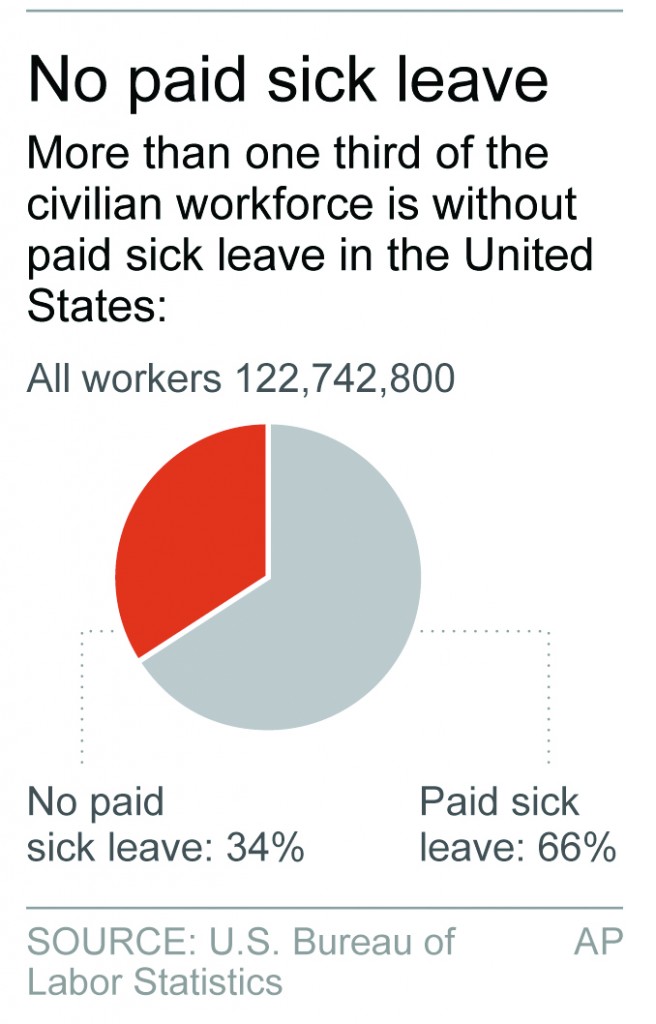 Sniffling, groggy and afraid she had caught the flu, Diana Zavala dragged herself in to work anyway for a day she felt she couldn’t afford to miss.

A school speech therapist who works as an independent contractor, she doesn’t have paid sick days. So the mother of two reported to work and hoped for the best, but she was aching, shivering and coughing by the end of the day. She stayed home the next day, then loaded up on medicine and returned to work.

“It’s a balancing act” between physical health and financial well-being, she said.

An unusually early and vigorous flu season is drawing attention to a cause that has scored victories but also hit roadblocks in recent years: mandatory paid sick leave for a third of civilian workers, more than 40 million people, who don’t have it.

Supporters and opponents are particularly watching New York City, where lawmakers are weighing a sick-leave proposal amid a competitive mayoral race.

Pointing to a flu outbreak that the governor has called a public health emergency, dozens of doctors, nurses, lawmakers and activists, some in surgical masks, rallied Friday on the steps of City Hall to call for passage of the measure, which has awaited a City Council vote for nearly three years. Two likely mayoral contenders have also pressed the point.

The flu spike is making people more aware of the argument for sick pay, said Ellen Bravo, executive director of Family Values at Work, which promotes paid sick time initiatives around the country. “There’s people who say, ‘Okay, I get it; you don’t want your server coughing on your food,’” she said.

Advocates have cast paid sick time as both a workforce issue akin to parental leave and living-wage laws, and a public health priority.

But to some business owners, paid sick leave is an impractical and unfair burden for small operations. Critics also say the timing is bad, given the choppy economy and the hardships inflicted by Superstorm Sandy.

Michael Sinesky, an owner of seven restaurants around the city, was against the sick-time proposal before Sandy. And after the storm shut down four of his restaurants for days or weeks, costing hundreds of thousands of dollars that his insurers have yet to pay, “we’re in survival mode.”

“We’re at the point right now where we cannot afford additional social initiatives,” said Sinesky, whose 500 employees switch shifts if they can’t work, an arrangement that some restaurateurs say benefits workers because paid sick time wouldn’t include tips.

Employees without sick days are more likely to go to work with a contagious illness, send an ill child to school or day care, and use hospital emergency rooms for care, according to a 2010 survey by the University of Chicago’s National Opinion Research Center. A 2011 study in the American Journal of Public Health estimated that a lack of sick time helped spread 5 million cases of flu-like illness during the 2009 swine flu outbreak.

Paid sick-day requirements are popular in polls, but only Seattle,  Washington, D.C., San Francisco, and Connecticut have them.

In New York, City Councilwoman Gale Brewer’s proposal would require up to five paid sick days a year at businesses with at least five employees. It wouldn’t include independent contractors such as Zavala.