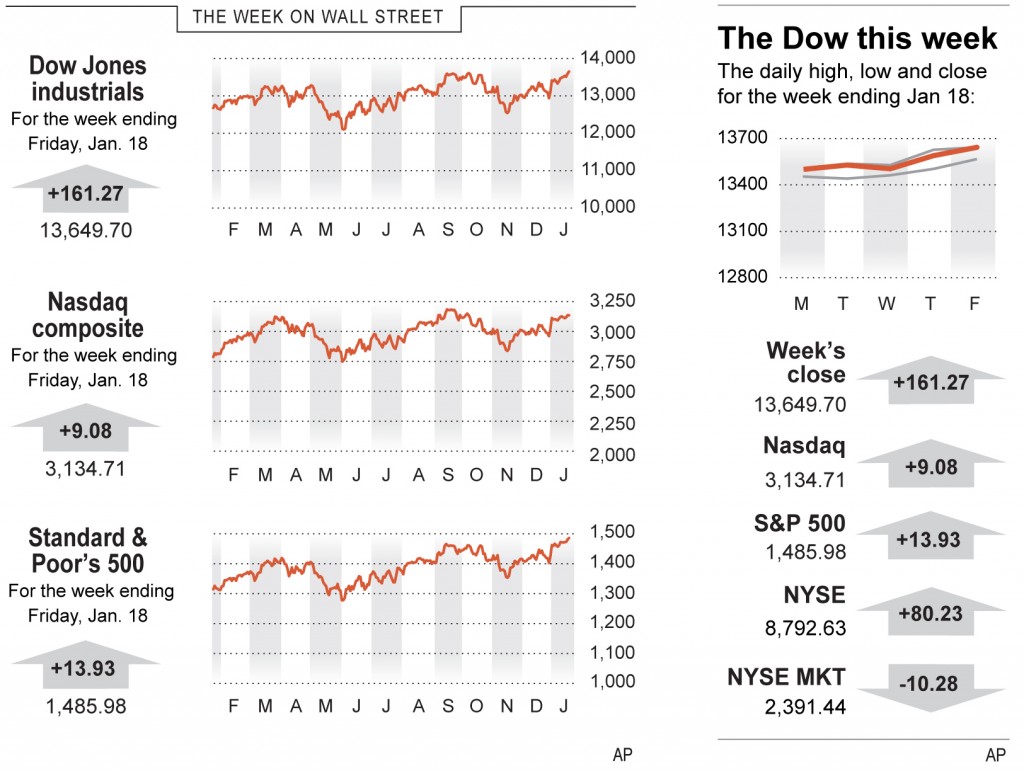 The Dow and S&P 500 closed at five-year highs on Friday as the market registered a third straight week of gains on a solid start to the quarterly earnings season.

Shares of Morgan Stanley shot up 7.9 percent to $22.38. It reported a fourth-quarter profit after a year-earlier loss, helped by higher revenue at the bank’s institutional securities business.

But Friday’s rise was held back by shares of Intel Corp , which slumped 6.3 percent to $21.25 a day after it forecast quarterly revenue below analysts’ estimates and announced plans for increased capital spending amid slow demand for personal computers.

Another factor that has been weighing on the market before a three-day weekend is uncertainty about the federal debt limit and spending cuts that could hamper U.S. growth. U.S. markets will be closed on Monday for the Martin Luther King Jr. legal holiday.

There were signs on Friday that the question of raising the U.S. debt limit would be put off for a while. House Republican leaders said they would seek to pass a three-month extension of federal borrowing authority next week to buy time for the Democratic-controlled Senate to pass a budget that shrinks deficits.

The CBOE Volatility index, Wall Street’s so-called fear gauge, fell 8.2 percent. The VIX usually moves inversely to the S&P 500 as it is used as a hedge against further market decline.

Economic data from China also provided some support to the market, though the focus remained on U.S. corporate earnings. China’s economy grew at a modestly faster-than-expected 7.9 percent in the fourth quarter, the latest sign the world’s second-biggest economy was pulling out of a post-global financial crisis slowdown which saw it grow in 2012 at its weakest pace since 1999.

Despite the gains by Morgan Stanley, financial stocks sagged as Capital One Financial reported disappointing profit. Capital One slumped 7.5 percent to $56.99, while the KBW bank index slipped 0.3 percent.

Volume was roughly 6.6 billion shares traded on the New York Stock Exchange, the Nasdaq and the NYSE MKT, compared with the 2012 average daily closing volume of about 6.45 billion.

Advancers outpaced decliners on the NYSE by nearly 2 to 1 and on the Nasdaq by about 13 to 11.