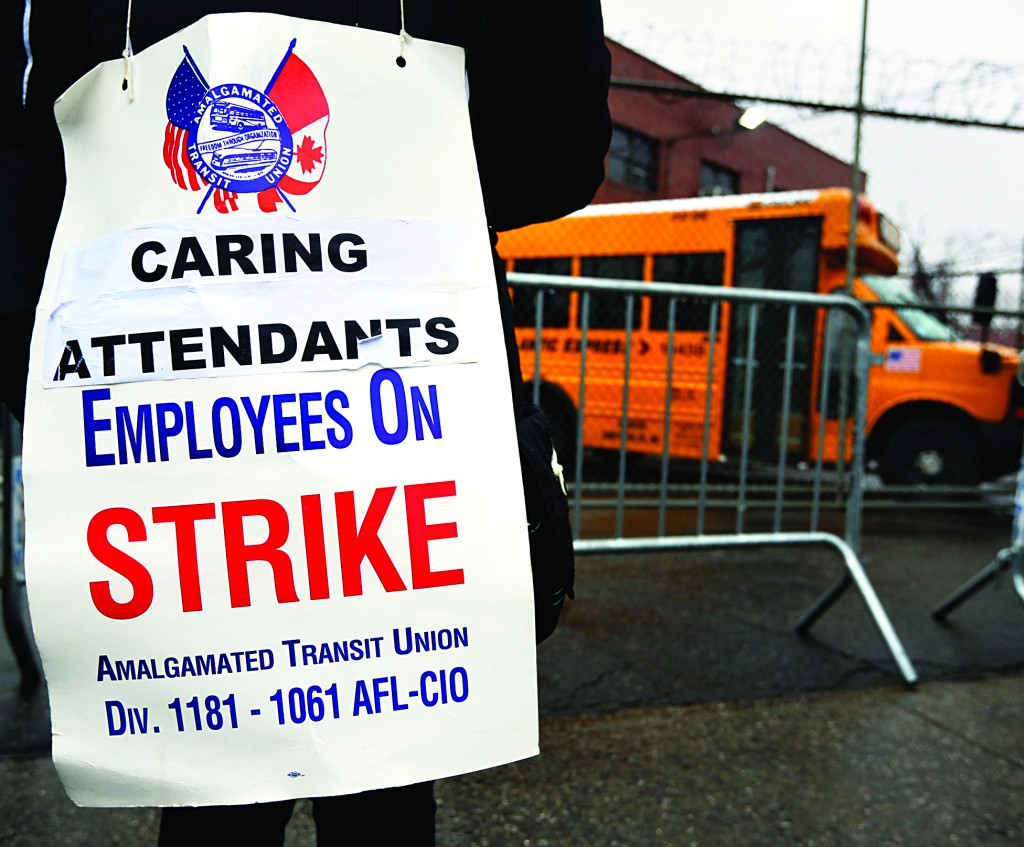 The city’s first school bus strike in 34 years entered its second day Thursday with no resolution in sight and tens of thousands of parents scrambling to get their kids to school.

Saah Hinneh brought his third-grader to Staten Island Community Charter School and then rushed to work.

“I’m supposed to be at work at 8 o’clock,” he said. “If you are late three times, they write you up.” Hinneh said if the strike continues, he will ask for his shift to be changed. “I don’t want to lose my job,” he said.

The strike pits the city’s need to rein in spiraling costs against the bus drivers’ goal of preserving their jobs. The cost of busing students has risen from $100 million in 1979 to $1.1 billion now, almost $7,000 per bus passenger, compared with $3,200 in Chicago and $5,000 in Miami.

The city contracts with private companies, and Mayor Bloomberg said the city must seek competitive bids to save money. Local 1181 of the Amalgamated Transit Union wants new contracts to include job protections for current drivers.

“The strike is about job guarantees that the union just can’t have,” Bloomberg said Wednesday.

Local 1181 President Mike Cordiello went on a media program on Thursday to plead his case. “Stop saying that you can’t negotiate — you can,” he said.

On a union picket line in Queens, a bus matron who goes by the name of C. Gorman said she herself has two special-education kids who depend on school buses to take them to class.

“I’m paying $30 a day to get them to and from school every day while I’m here,” said Gorman, who lives in Brooklyn’s Bedford-Stuyvesant neighborhood.

Between loss of salary due to the strike and money needed to get the kids to school, “I’m losing money,” she said. “I don’t think I have enough money to make it through the month.”

Some buses were running Thursday whose drivers are not members of Local 1181. The city DOE said 2,320 bus routes out of 7,700 were operating.

The department also said strikers tried to block buses from leaving 11 depots on Thursday. The union did not immediately return a call seeking comment.

About a dozen parents and activists rallied in support of the union in front of City Hall.

Johnnie Stevens said his son, Kwame, 10, who has Asperger’s syndrome, feels comfortable with his bus driver and matron.

“Yesterday, he was crying, ‘I don’t want to go on the train. Why can’t I take the bus?’” Stevens said. He ultimately drove Kwame from the family’s home in Manhattan’s Chelsea neighborhood to the child’s East Harlem school; Kwame was sick with an apparent case of flu Thursday and stayed home, the father said.

Local 1181 released an ad Wednesday that showed images of wrecked buses and warned, “When inexperienced drivers take your kids to school, sometimes they never get there.”