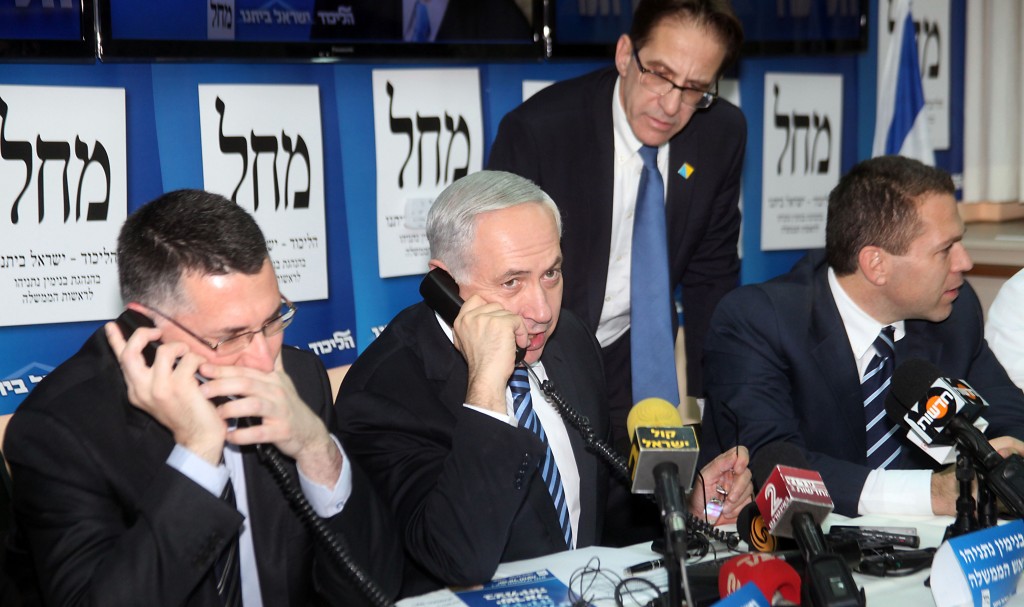 A flurry of opinion polls released over the past 48 hours — the last ones legally permitted to be publicized ahead of Election Day next Tuesday — show an inconclusive picture of how the 19th Knesset will look.

While it is widely expected that Binyamin Netanyahu’s Likud-Beiteinu will come out far ahead of any other party, projections about the number of seats the list will garner vary among polls. Should the party’s downward slide continue, it would make it very hard to assemble a stable ruling coalition.

According to a new Dialog poll published Wednesday night, the Likud-Beiteinu list had fallen by three seats in the last week to 32, 10 seats fewer than the two parties, Likud and Avigdor Lieberman’s Yisrael Beiteinu, combined have in the current Knesset.

However, other poll results were more encouraging for the Netanyahu-Lieberman team-up: Israel Radio gave them 37, and two major daily newspapers said they had 37-8, showing new strength in recent days. Other polls showed them with 34.

The Jerusalem Post speculated that the Likud-Beiteinu drop (according to those polls) was influenced by the report this week in Bloomberg of disparaging comments made about Netanyahu by U.S. President Barack Obama. However, there was only the circumstantial evidence of the Dialog sample having been taken after the comments were publicized to support such a conclusion.

Some pundits argued that the main benefactor of those comments should have been Tzipi Livni’s Movement party. As a former foreign minister who negotiated with the Palestinians, she based her campaign on attacking Netanyahu for the lack of an active peace process with Mahmoud Abbas. But her list suffered a significant drop in support in recent days, according to the comments, with one poll predicting she will get only 5 seats. Since announcing her campaign she had between 9 and 13 seats in the polls.

The leftist Labor party was widely expected to become the second-largest party, gaining between 15 to 18 seats. However, a Geocartigraphia poll showed the ascendant national-religious Jewish Home party would edge out Labor with 18 seats to Labor’s 16. Other polls predict JH will take 14 to 16. Either way, if the polls hold true, they would the party’s rise would be the biggest surprise in the election.

Jewish Home has been making its future position in the next government a campaign selling point. On Wednesday, a new ad appeared featuring a picture of Netanyahu and JH chairman Naftali Bennett with the slogan “Supporting Netanyahu, voting Bennett.”

Even if Jewish Home performs as well at the ballot box as it has in the polls, its prospects as a coalition partner were somewhat dampened by reaction in the Likud to the Jewish Home campaign. Likud sources told The Jerusalem Post that Netanyahu would likely only invite JH to join the government after a coalition majority of at least 61 MKs will be formed, so as to minimize the right-wing party’s leverage if it does join. Netanyahu reportedly is averse to having his former aide Bennett sharing power with him and pulling him rightward.

Netanyahu isn’t the only one concerned about the rise of Jewish Home. U.S. Ambassador to Israel Dan Shapiro on Wednesday met with Naftali Bennett, according to media reports.

The meeting was said to have come about because the White House is “concerned” over the possibility that its presence in the government would make it even harder to reach a compromise with the Palestinians.

Bennett told Shapiro that “there is no chance that a government formed by Netanyahu would accept any agreement with the Palestinians,” due to their ongoing refusal to make compromises on any of the core issues, Arutz Sheva reported.

Chareidi parties were depicted as holding fairly steady. Most polls showed United Torah Judaism gaining 6 seats, up from 5 in the current Knesset; and Shas between 10 to 12, as opposed to the current 11. However, Shas is always under-predicted in pre-election polls, leading party officials to express optimism ahead of Election Day.

Gedolei Torah and chareidi leaders from across the spectrum have been warning that the fate of the entire community hangs in the balance, faced with an unprecedented threat of the drafting of yeshivah students and drastic cutbacks in funding to educational institutions and poor families.

But while the chareidi public is approaching the election with such trepidation, much the same is being said on the secular side.

Pollsters and journalists have been analyzing poll results in terms of a right-religious bloc versus the center-left. Estimates for the former range from 65 to 72 Knesset seats, as against 48 for the center-left, including the Arab parties.

Forecasts that religious politicians — chareidi as well as national religious — will take some 40 of those seats (compared to 25 in the outgoing Knesset) have the secular parties launching a scare campaign that such numbers foreshadow a surging theocracy.

Of the other parties, Yair Lapid’s Yesh Atid was seen with 9 to 11 seats, Tzipi Livni’s Movement party was given anywhere from 5 to 9 seats, Kadima 2-3 —  just barely crossing the election threshold, Meretz — which has seen a recent surge in support — 6, Hadash and Balad 4 each, 3 for the United Arab List, and 2 for Strong Israel.