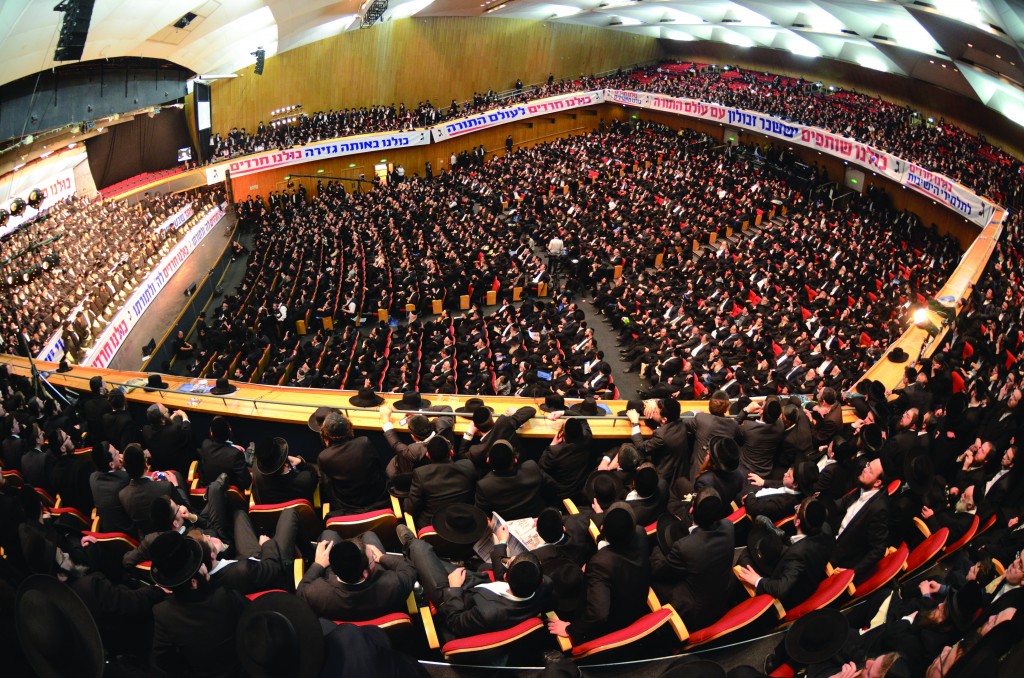 Thousands attended a pre-election rally held in Yerushalayim and headed by Gedolei Yisrael, shlita, in support of the United Torah Judaism list for Knesset elections. In light of the great threats facing the Torah and yeshivah world by those who hate religion, it is incumbent on each person to vote and work on behalf of UTJ, it was declared. In addition to the thousands of attendees at the Binyanei Ha’umah conference center, some 70,000 men and women viewed live feed of the event at dozens of satellite locations in chareidi cities and towns around the country.

By their very presence, in addition to their piercing words, Gedolei Yisrael expressed apprehension about the decrees that are threatening the Torah world. They stressed the weighty responsibility that these elections carry, and how, more than any other time, it is a day of judgment that will affect future generations.

The event was emceed by Rabbi Yeshayau Lieberman, director of Mercaz Bais Yaakov and the Bnos Bais Yaakov-Batya organization. He began by noting that “b’hisasef roshei am, yachad shivtei Yisrael” — the very fact that the Gedolim extended themselves to attend the event and to speak about the importance of its cause indicates how serious the situation is.

The assemblage began by davening Maariv together. The baal tefillah was Harav Simchah Scheinberg, shlita, Rosh Yeshivas Torah Ohr, who is in the year of mourning for his father, Harav Chaim Pinchas Scheinberg, zt”l.

Maariv was followed by the emotional recital of Tehillim, led by Harav Binyamin Sofer, the Rav of Kehillas Erlau, who recited the perakim passuk by passuk, followed by the crowd.

Harav Asher Neuhaus, shlita, Rosh Yeshivas Sifsei Tzaddik in Chatzor, masterfully described the waves of hatred of religion that are rampant in the country. He noted that in previous elections, Gedolei Yisrael classified election day as a yom hadin for the religious community. If that was the case for earlier election cycles, how much more so is it the case this time around.

This election, he said, will decide many issues that affect our very existence. We must warn and arouse the public because the danger is at our doorstep. This does not only refer to budget allocations and monetary assistance; there is a trend to destroy the yeshivah world and the Torah way of life in Eretz Yisrael.

Harav Yosef Efrati, shlita, the devoted confidant of Harav Yosef Shalom Elyashiv, zt”l, noted that the Gemara says that thousands of years ago, the young kohanim would try to wake up the Kohen Gadol with a snap of their fingers. We are in a situation where Gedolei Yisrael are going from place to place trying to arouse the public, while the public remains largely apathetic.

“I asked Harav Chaim Kanievsky today what to say in his name. He said that it is simple and clear that they plan to uproot everything. There are those who don’t feel the severity of the hour, and we must wake them up.”

It was at this point that the Gedolei Yisrael walked in, to the resounding singing of the crowd.

The Belzer Rebbe began by reading a recently discovered letter signed by Harav Aharon of Belz, zy”a, the Beis Yisrael, zy”a, and his father, the Bilgorayer Rav, zy”a.

“To our brothers, Bnei Yisrael: As the day of elections for the parliament in the state approaches, it is vital to fight for the preservation of Torah and religion in the state… Therefore, I ask from our brothers to work for the success of the united list, Beis [under which Agudas Yisrael ran in those days], and to vote for it.

“Divrei hamevarchim b’chol tuv, and may Hashem help that we should raise the glory of Torah and see the Redemption speedily in our day, amen.”

The Belzer Rebbe then said that even when we were in galus, Hashem helped and we had yeshivos and batei medrash and shtieblach where Bnei Yisrael learned Torah day and night. Baruch Hashem, here, too, in Eretz Yisrael, we have tens of thousands of bnei yeshivah who learn Torah undisturbed. However, there is a danger hovering over the bnei yeshivah in Eretz Yisrael.

Baruch Hashem, we have those standing guard to save the yeshivah world from all those who seek to disrupt it, and to help the girls’ schools. Baruch Hashem, they have siyatta diShmaya and success in all areas, and it is all dependent now on the support we give them, meaning the slip of paper that we put in the ballot box on Election Day.

“We always have to be together, united, but now more than ever, because Yiddishkeit in our holy country is dependent on it. Although we are small in number, by being united we will reach great heights.”

Harav Yitzchak Silberstein, shlita, related that a bachur once tragically passed away in the yeshivah in Kfar Chassidim. The Rosh Yeshivah, Harav Mishkovsky, stood at the levayah and wept, saying that he had been given a bachur to watch over, and even though he was not at fault for his sudden passing, he still had to make three vows (Bava Metzia 34b) — “a vow that I was not lax in watching him, a vow that I did not use the collateral, and [a vow that] that it is not in my possession. I declare to the parents and to Hashem that I was not lax in watching him, chalilah, and now he was taken from me and is no longer in my possession.

“Bnei Torah are standing before us. If, chalilah, they will be drafted, we as parents will have to tell Hashem: You have given me a collateral. I was not lax, I was not lazy, and I did what I could to save the yeshivos.

“We must know that if the worst-case scenario is realized and there is a draft, each person will be asked if [he] did everything [he] could to prevent it.”

The emcee, Rabbi Lieberman, read a letter from the Erloyer Rebbe, shlita.

The Sanz-Klausenberger Rebbe of Eretz Yisrael, shlita, noted that we are facing enemies with one common denominator: they are against those who learn Torah, and their intention is to shut down yeshivos.

“We don’t have to worry about Torah because we have been promised in the nevuah of Rabi Shimon bar Yochai that Torah will never be forgotten [among] Am Yisrael. But we are responsible for the millions of Yidden who live here. We need Your miracles and wonders every day.

“The whole existence of the yishuv in Eretz Yisrael does not have a rational explanation. There is no doubt in the world that the merit of those who learn Torah is what protects us. If until now they supported Torah a little bit, and they were successful in battle for their support of Torah, the Satan now wants to take this merit that they have in Toras Eretz Yisrael away from the masses. And that is the danger — the moment the rest of the nation has no part in Torah, even in the most indirect way, the situation will become very dangerous, chalilah.”

Harav Gershon Edelstein, shlita, Rosh Yeshivas Ponevezh, said that anyone who votes for UTJ is declaring, “Hashem Hu HaElokim.” “This is the stamp of kevod Shamayim in front of the whole general public, and there is great reward for it,” he stated.

Harav Yehudah Silman read a letter sent by Harav Nissim Karelitz, shlita, who was unable to attend due to a family simchah.

Hagaon Harav Aharon Leib Steinman, shlita, said that every person in Am Yisrael knows that all the mitzvos are holy and there is no way to estimate or describe their greatness. But there is an aveirah of chillul Hashem, and the converse is kiddush Hashem. Rabbeinu Yona writes that a chillul Hashem is worse than avodah zarah.

“A positive thing is greater than a negative. So if chillul Hashem is worse than avodah zarah, then by making a kiddush Hashem — and by voting one declares his desire that Am Yisrael should live their lives with more kedushah and Torah —then that is a kiddush Hashem. This is not an opportunity we have very day.

“The vote at the ballot box expresses to the world our desire to have the Name of Hashem sanctified in the world, and that Klal Yisrael should act according to the Torah, until the arrival of the Geulah.”

Harav Yisrael Hager, shlita, Vizhnitzer Rebbe of Eretz Yisael, said that during the Yamim Nora’im we say, “U’v’chen ten kavod Hashem l’amecha, Hashem, give honor to Your nation” which is followed by “and they will be one union, agudah echas.” This implies that the condition for yiras Hashem, for kevod Shamayim and the honor of Klal Yisrael is unity.

“That is the objective of the Agudas Yisrael movement, founded more than 100 years ago by Gedolei Yisrael, zy”a, to unite all those who fear Hashem under one banner.

“Today we are four days before elections, which Harav Aharon Kotler stated was a yom hadin. Four days before [the] Yom Hadin are days of introspection when Klal Yisrael recites Selichos. We have to wake up at this time, to take a good look out ourselves, and see what we can do to increase the strength of UTJ so its representatives will be able to … continue strengthening religion. As the Chazon Ish said, many Torah entities and the continued existence of Yiddishkeit are contingent on our success in elections.”

Hagaon Harav Shmuel Auerbach, shlita, Rosh Yeshivas Maalos HaTorah, was unable to attend for health reasons. He published a letter on Wednesday declaring it an eis tzarah, a time of travail, for the Jewish people and urging everyone to vote for UTJ to thwart the campaign to destroy the yeshivos.