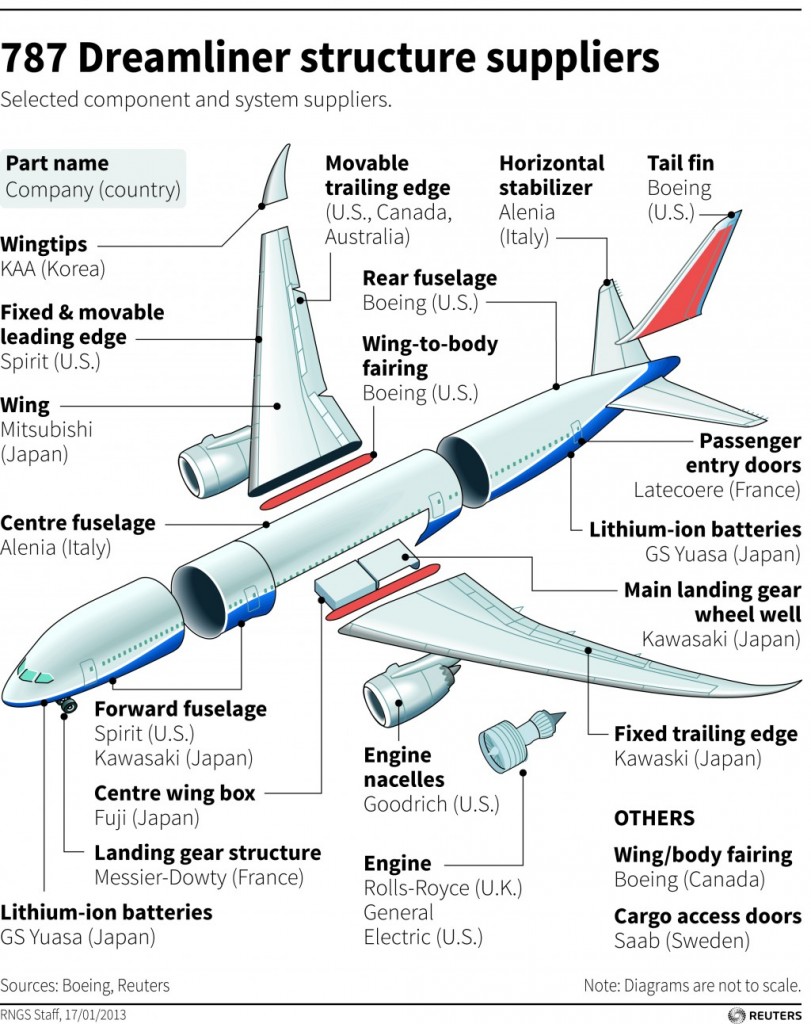 Airlines scrambled on Thursday to rearrange flights as regulators around the world joined the United States in grounding Boeing Co.’s 787 Dreamliner passenger jets while battery-related problems are investigated.

Poland’s state-controlled LOT Airlines said it would seek compensation from Boeing for grounding its two planes. It expects delivery of three more Dreamliners by the end of March but would take them only if the technical issues have been resolved, deputy chief Tomasz Balcerzak told a news conference.

The lightweight, mainly carbon-composite aircraft has been plagued by mishaps, raising concerns about its use of lithium-ion batteries. An All Nippon Airways Co. Ltd. domestic flight made an emergency landing on Wednesday after warning lights indicated a battery problem.

“While it is entirely possible that the current battery issue is resolved in short order, it is also equally possible that the 787s current certification could be called into question,” BB&T Capital Markets analyst Carter Leake wrote Thursday, cutting his rating on the stock to “underweight.”

The FAA temporarily grounded Boeing’s newest commercial airliner on Wednesday, saying carriers would have to demonstrate the batteries were safe before the planes could resume flying.

It is the first such action since the McDonnell-Douglas DC-10 had its airworthiness certificate suspended after a deadly crash in Chicago in 1979, analysts said.

Boeing has sold about 850 of its new aircraft, with 50 delivered to date. Around half of those have been in operation in Japan. Airlines in India, South America, Poland, Qatar and Ethiopia and the United States are also flying the 787, which has a list price of $207 million.

By Boeing’s accounting, the 787 program will not be considered profitable until the company has delivered 1,100 Dreamliners. As it stands, the plane accounts for a small portion of Boeing’s revenue, given that it produces five of them a month versus 35 for the 737 model.

Scott Hamilton, an analyst at Leeham Co, an aerospace consulting firm in Seattle, said having a plane grounded “is about the worst thing that can happen to an airplane program.”

“If this goes beyond just a bad design of a battery and you have to redesign some systems leading to the battery and look at why didn’t safeguards on this thing work, you get a ripple effect. They’ll have more airplanes going out the door and they can’t deliver them. So you build up inventory. Every day … is an added day of delivery delays.”

Six new 787s, painted and apparently ready for delivery, were parked on the apron at Paine Field in Everett, Washington, next to Boeing’s 787 plant. Four more Dreamliners occupied the final assembly spots inside the factory.

American Airlines, which just this week placed firm orders for 42 Dreamliners, pending U.S. Bankruptcy Court approval, said it was sticking to its plans.

“We are in constant dialogue with Boeing. We believe the 787 is a great aircraft,” Virasb Vahidi, chief commercial officer for American, said in an interview.