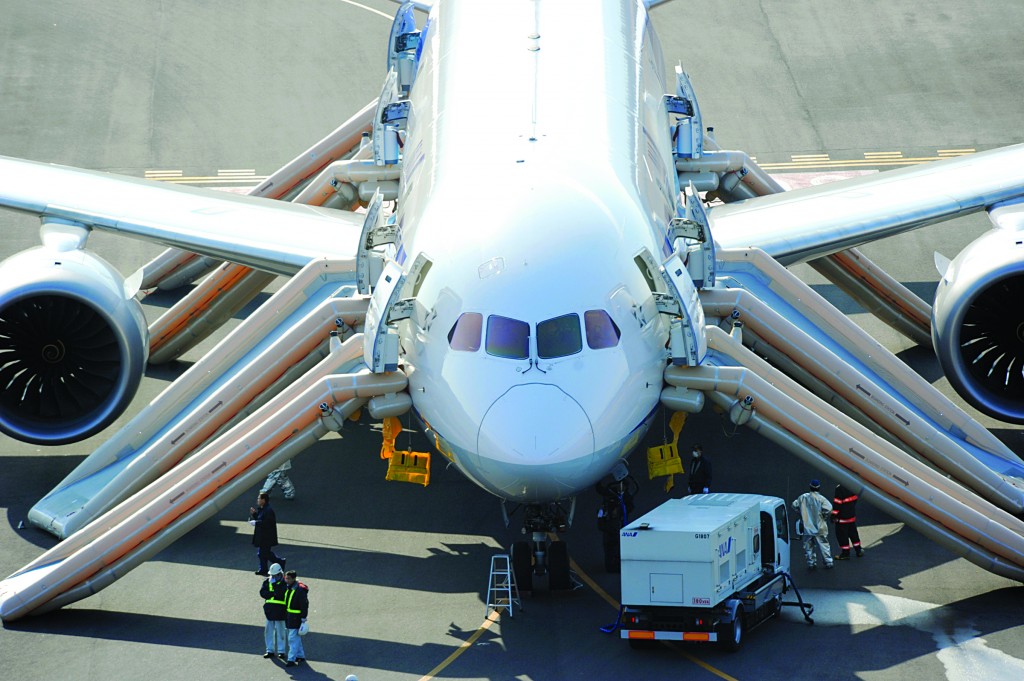 Japan’s two biggest airlines grounded all their Boeing 787 aircraft for safety checks Wednesday after one was forced to make an emergency landing in the latest blow for the new jet.

All Nippon Airways said a cockpit message showed battery problems and a burning smell was detected in the cockpit and the cabin, forcing the 787 on a domestic flight to land at Takamatsu airport in western Japan.

It said a later inspection of the plane found leaking electrolyte and burn marks around the main battery, located in an electrical room below the cockpit.

The 787, known as the Dreamliner, is Boeing’s newest and most technologically advanced jet, and the company is counting heavily on its success. Since its launch, which came after delays of more than three years, the plane has been plagued by a series of problems including a battery fire and fuel leaks. Japan’s ANA and Japan Airlines are major customers for the jet and among the first to fly it.

Japan’s transport ministry said it received notices from ANA, which operates 17 of the jets, and Japan Airlines, which has seven, that all their 787s would not be flying. The grounding was done voluntarily by the airlines. 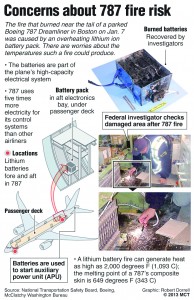 “We are very sorry to have caused passengers and their family members so much concern,” said ANA Senior Executive Vice President Osamu Shinobe.

The earliest manufactured jets of any new aircraft usually have problems and airlines run higher risks in flying them first, said Brendan Sobie, Singapore-based chief analyst at CAPA-Center for Aviation. Since about half the 787 fleet is in Japan, more problems are cropping up there.

“There are always teething problems with new aircraft and airlines often are reluctant to be the launch customer of any new airplanes,” Sobie said. “We saw it with other airplane types, like the A380 but the issues with the A380 were different,” he said.

Japan’s transport ministry categorized Wednesday’s problem as a “serious incident” that could have led to an accident, and sent officials for further checks to Takamatsu airport. The airport was closed.

The U.S. National Transportation Safety Board, the Federal Aviation Administration and Boeing were sending representatives to Japan on Wednesday to work with the Japanese government on the investigation, NTSB spokeswoman Kelly Nantel said.

One man in his 60s was taken to the hospital for minor hip injuries after going down an emergency slide from the aircraft, the fire department said. The other 128 passengers and eight crew members were uninjured, according to ANA.

Video shot by a Japanese reporter, who was on board the flight, showed the interior of the plane as passengers were evacuating and sliding down chutes..