World France to Stay in Mali Until Stability Restored
World 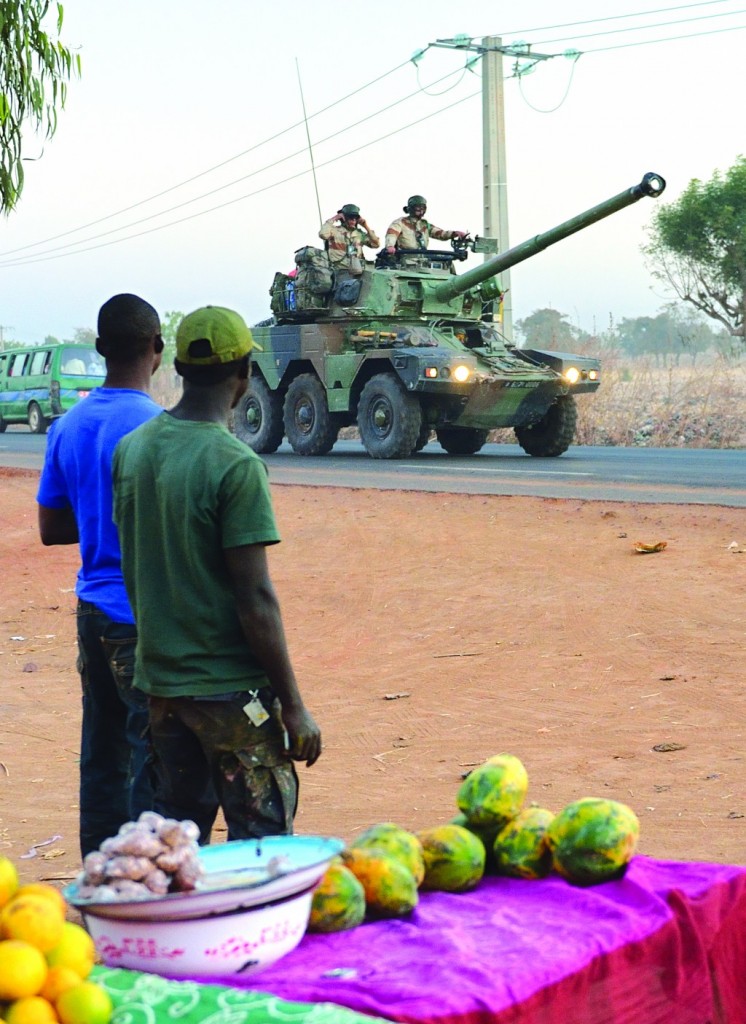 France pledged Tuesday to keep troops in Mali until stability returned to the West African country, raising the specter of a long campaign against al-Qaida-linked rebels who held their ground despite a fifth day of air strikes.

Paris has poured hundreds of soldiers into Mali and carried out 50 bombing raids since Friday in the Islamist-controlled northern half of the country, which Western and regional states fear could become a base for terrorist attacks in Africa and Europe.

Defense Minister Jean-Yves Le Drian said that, despite French air support, Malian forces had not been able to dislodge Islamist fighters from the central Malian town of Konna or Diabaly, just 220 miles northeast of Bamako.

A column of French armored vehicles rolled northward from the dusty riverside capital of Bamako towards rebel lines on Tuesday, the first major northward deployment of ground troops.

Thousands of African soldiers are due to take over the offensive, but regional armies are scrambling to accelerate the operation, initially not expected for months but been brought forward by France’s bombing campaign aimed at stopping the advance on a strategic town last week.

President Francois Hollande, on a visit to the United Arab Emirates during which he sought Gulf states’ financial backing for the mission, suggested France would retain a major role in its former colony for months.

“We have one goal. To ensure that when we … end our intervention, Mali is safe, has legitimate authorities, an electoral process and there are no more terrorists threatening its territory,” Hollande told a news conference.

Paris has said it plans to deploy 2,500 soldiers to bolster the Malian army and work with the intervention force provided by West African states.

West African defense chiefs met in Bamako Tuesday to approve plans for speeding up the deployment of 3,300 regional troops, foreseen in a U.N.-backed intervention plan.

Nigeria pledged to deploy soldiers within 24 hours, and Belgium said it was sending transport planes and helicopters to help, but West Africa’s armies need time to become operational.

Any delay in following up on the French air bombardments of Islamist bases and fuel depots with a ground offensive could allow the insurgents to slip away into the desert and mountains, regroup and counter-attack.

The rebels, who French officials say are mobile and well armed, have shown they can hit back, dislodging government forces from Diabaly on Monday.

Residents said the town was still under Islamist control on Tuesday, despite a number of air strikes that shook houses.

An eyewitness near Segou, to the south, told Reuters he had seen 20 French Special Forces soldiers driving toward Diabaly.

In Konna, whose seizure on Thursday sparked French involvement, residents said Islamist fighters were camped just outside town. Army troops had also withdrawn after entering the town on Saturday.

“With the arrival of the French, we have started to see the situation on the front evolve in our favor,” said Aba Sanare, a resident of Bamako.

France, which has repeatedly said it has abandoned its role as policeman of its former African colonies, said Monday that the U.S., Canada, Denmark and Germany had offered support.

Fabius has said Gulf Arab states would help the Mali campaign, while Belgium said on Tuesday it would send two C-130 transport planes and two medical helicopters, following a request from Paris. A meeting of donors for the operation was expected to be held in Addis Ababa at the end of January.

Security experts have warned that the multinational intervention in Mali, couched in terms of a campaign by governments against terrorism, could provoke a jihadist backlash against France and the West, and African allies.

U.S. officials have warned of links between AQIM, Boko Haram in Nigeria and al Shabaab Islamic terrorists fighting in Somalia.

Al Shabaab, which foiled a French effort over the weekend to rescue a French secret agent it was holding hostage, urged Muslims around the world to rise up against what it called “Christian” attacks against Islam.

“We have made a commitment that al-Qaida is not going to find any place to hide,” U.S. Defense Secretary Leon Panetta told reporters as he began a visit to Europe. Panetta later said the U.S. had no plans to send troops to Mali. 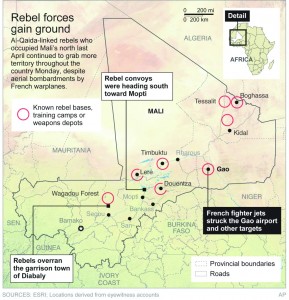