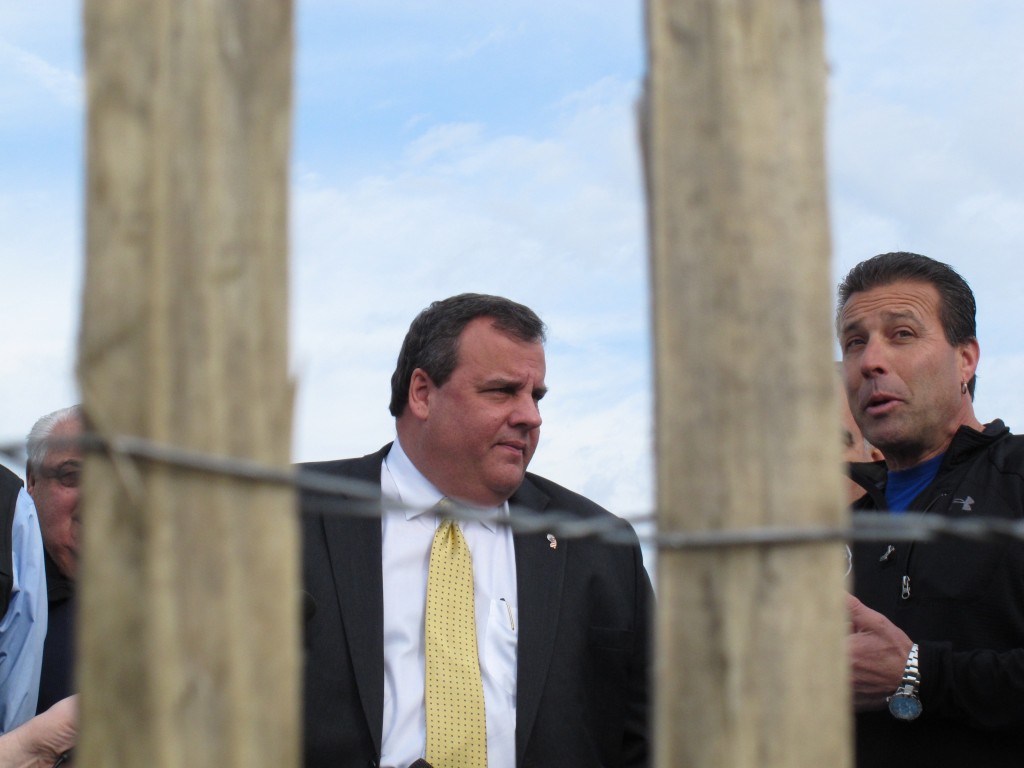 This Jersey shore town came through Superstorm Sandy in better shape than many of its neighbors that sustained serious to catastrophic damage from the waves and storm surge.

On Monday, Gov. Chris Christie used a dune reconstruction project here as a backdrop for some harsh criticism of oceanfront property owners who are blocking protective dune projects in other towns, on the grounds that the work will interfere with their oceanfront views.

“That’s extremely selfish and short-sighted,” Christie said. “We’re looking at ways we can place requirements, legally, to make sure these dune systems are built.”

The governor’s comments came as tourism officials arrived in Trenton to plead for an infusion of emergency funds to market the shore, and Rutgers University economists predicted a post-Sandy construction boomlet would have a positive effect on the state’s economy.

In Trenton, Diane Wieland of the Cape May County Department of Tourism and others urged an Assembly panel to support a bill that would appropriate $20 million in emergency funds to market the Jersey Shore before the summer season.

Wieland said the shore tourist season, which employs thousands of residents and on which many seaside towns’ budgets are based, may depend on an infusion of funds to get the message out that the entire shore is not “gone.”

Christie, meanwhile, was focused on rebuilding.

“What I care most about is that an aggressive dune system is built and maintained,” Christie said. “There shouldn’t be any debate about it. I hope that a group of homeowners doesn’t place the lives of an entire town at risk because they want a little bit better of a view.”

The debate had been under way for years, but took on new urgency after Sandy wrecked parts of the shore — particularly those without dune systems. Often the question is one of private property rights versus the common good.

On Long Beach Island, a case involved an elderly couple in Harvey Cedars who sued over dune work in front of their $1.7 million house, arguing that it reduced their property value by harming the oceanfront view. A court awarded them $375,000 in compensation, the borough appealed, and the case is headed for the state Supreme Court.

Private homeowners associations in Toms River also are balking at allowing the township to carry out a dune project, saying they own the beach and will take care of it themselves. Only one of the township’s 30 private beach ownership groups has signed an easement granting Toms River the right to carry out dune work.

John Weber, head of the Surfrider Foundation, said dunes should be made part of any beach replenishment project carried out by the U.S. Army Corps of Engineers. He encouraged local beach towns to build their own dune systems, as Bradley Beach did.

Trees are being used at numerous beaches to help reconstruct or bolster dune systems. The trees, placed at strategic angles, sometimes behind dune fencing, catch blowing sand and eventually become covered by it, forming the bases of new dune systems. A similar project will be carried out this weekend at Island Beach State Park.

Of course, dunes are not an iron-clad guarantee against damage. The Ortley Beach section of Toms River suffered some of the worst damage in the state, despite a dune system. Other Ocean County towns with dunes also suffered major damage.

But Christie said he favors expanding dune systems to areas where there are none now, to provide better protection against future storms.

Meanwhile, economists at Rutgers have estimated that Sandy will have a net positive effect on New Jersey’s economy assuming the state pulls in at least $25 billion for recovery and reconstruction.