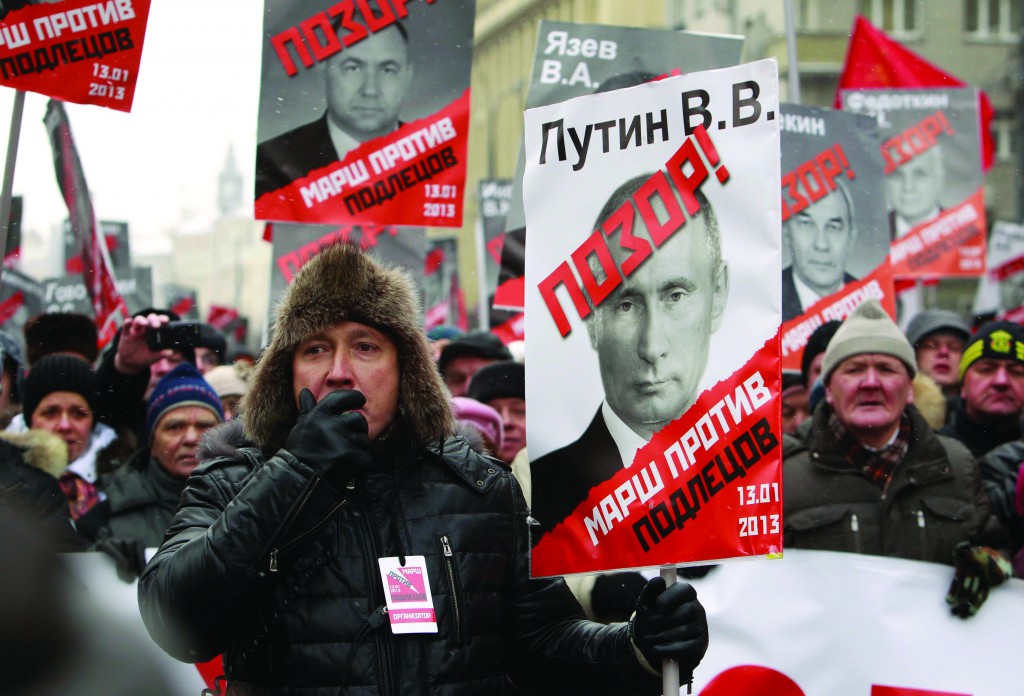 In the largest show of public discontent since President Vladimir Putin’s inauguration last May, thousands of demonstrators marched through downtown Moscow to protest a new law banning the adoption of Russian orphans by U.S. families.

The crowd, holding portraits of Putin and about 600 lawmakers who voted for the law, filled Moscow’s Boulevard Ring, a procession that resembled old-time Communist May Day celebrations. At the end of the march, the portraits were dumped into a huge garbage bin.

Moscow police did not interfere with the peaceful march. Putin’s spokesman, Dmitry Peskov, said Sunday night that “every point of view had a right to exist” but reminded that “the law that came into effect should be regarded as law.”

The law, rushed through the parliament, is seen as retribution for the Sergei Magnitsky Act passed by the U.S. Congress and signed by President Barack Obama in December, which imposed visa restrictions and financial sanctions on Russian officials believed involved in the death of an imprisoned lawyer who blew the whistle on Russian officials allegedly involved in a multimillion-dollar tax refund scam.

The Kremlin, which called the U.S. measure “an unfriendly act,” moved to annul as of Jan. 1 an adoption agreement signed with the U.S. in June.

In the past two decades, Americans have adopted more than 60,000 orphans from Russia, a significant number of them with mental and physical disabilities. Despite more than 600,000 orphans in Russia, the adoption rate within Russia has not exceeded more than 7,000 in recent years.

In speedily passing the law, Russian lawmakers cited the death of several adopted children while under the care of American families.

The Russian bill raised protest inside Russia and in the West. On Thursday, Putin’s spokesman Peskov said the law allowing Americans to adopt Russian children would remain valid for another year. But a day later, he pulled back, saying that only children whose cases have already been ruled on by Russian courts “will go to their new parents.”