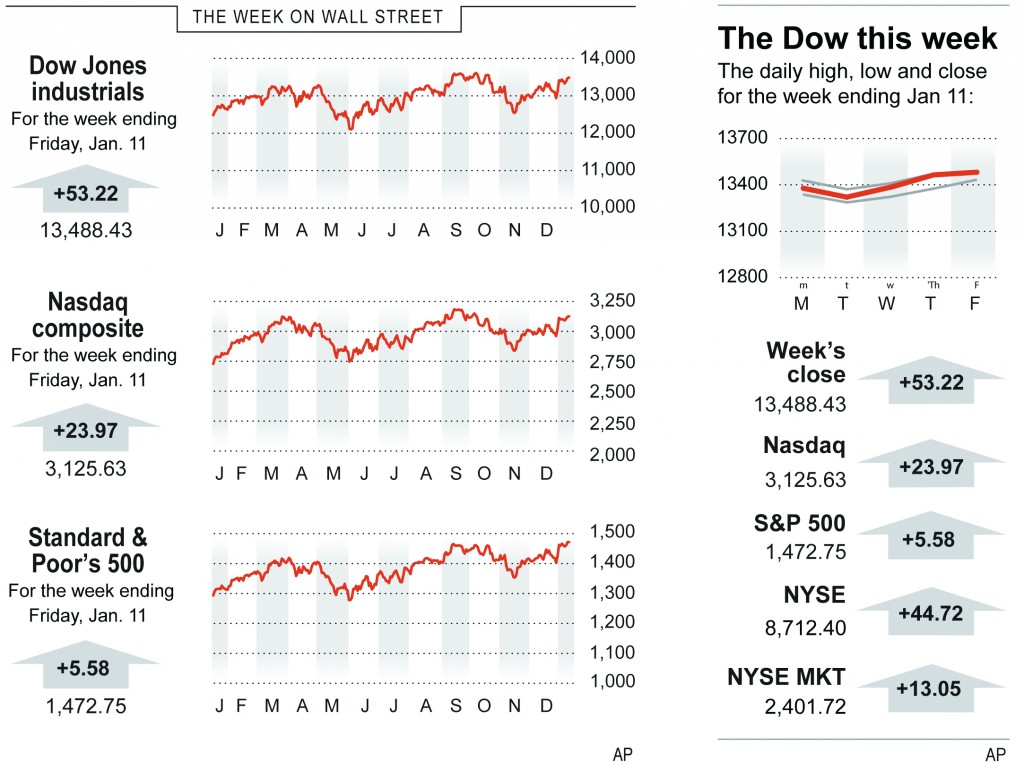 Stocks gained for a second straight week as company earnings reports started to come in, keeping the Standard and Poor’s 500 index within a fraction of its highest level in five years.

Companies have started to report earnings for the fourth quarter of 2012, but no clear pattern has emerged as yet.

Aluminum company Alcoa gave stocks a lift after it reported earnings late Tuesday that matched analysts’ expectations and said that demand was increasing. Investors were unimpressed by Wells Fargo’s record profits Friday, choosing instead to focus on the sustainability of those earnings.

Currently, analysts expect fourth quarter earnings for S&P 500 companies to grow at a rate of 3.3 percent, according to the latest data from S&P Capital IQ. That’s a better growth rate than the previous quarter, but it’s considerably weaker that the 8.4 percent growth rate recorded in the same period last year.

Wells Fargo, the first major bank to report earnings, dropped even after the bank reported a 25 percent increase in fourth-quarter earnings. The bank’s stock fell 30 cents, or 0.8 percent, to $35.10.

Boeing fell $1.93, or 2.5 percent, to $75.16 after the U.S. Federal Aviation Administration said it is launching a comprehensive review of the critical systems of Boeing’s 787, the aircraft maker’s newest and most technologically advanced plane, after a fire and a fuel leak earlier this week.

The stock market got a boost Thursday from reports suggesting the outlook for economic growth may be improving both in Europe and China.

Stocks are up on the year after lawmakers came up with a last-minute deal to prevent the U.S. from going over the “fiscal cliff.” That averted the threat of a series of tax hikes and spending cuts Jan. 1 that economists say would almost certainly have pushed the U.S. economy into recession.

Investors started the year by jumping into stocks, according to Bank of America Merrill Lynch research. Just over $22 billion was invested in equities in the first full week of this year, the second-highest weekly in-flow on record after the $22.8 billion that was invested in September 2007.

The yield on the 10-year Treasury note, which moves opposite to the security’s price, fell 4 basis points to 1.86 percent.