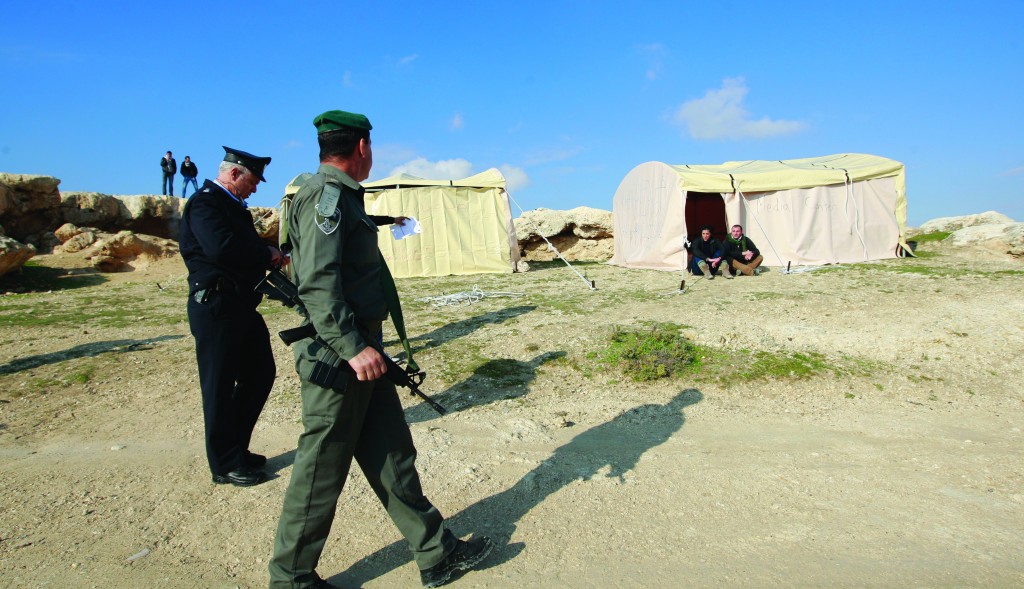 Israeli security forces moved quickly in a pre-dawn operation on Sunday to clear a hilltop in the E1 corridor near Yerushalayim of a Palestinian “outpost” which had been erected there on Friday.

Hundreds of Palestinians, along with Israeli and foreign activists, blitzed the site with numerous tents on Friday to protest recently announced Israeli plans to build new housing in the area, which the Palestinians claim will harm the territorial contiguity of a future state.

No injuries were reported in the eviction, in which a number of squatters had to be dragged away physically.

The tent protest had been coordinated with a petition to the High Court for a restraining order, which was issued. However, the government immediately contested it and it was withdrawn in time for the eviction early Sunday.

Asked why the protesters were removed, Netanyahu said: “They have no reason to be there. I asked immediately to close the area so people would not gather there needlessly and generate friction and disrupt public order.”

Israeli Prime Minister Binyamin Netanyahu told Army Radio on Sunday that it would take time to build E-1, citing planning procedures. Still, he said, “we will complete the planning, and there will be construction.” Officials have estimated the process will take as much as a year or two before bulldozers can be brought onto the site.

At the weekly Cabinet meeting, Public Security Minister Yitzchak Aharonovitch told ministers that “The Yehudah and Shomron police acted — along with units that it received yesterday as reinforcements — to evacuate 95 Palestinians, including women and children, who were on the hill along with 20-30 journalists, some from overseas, and the tents that they set up over the weekend.

“As soon as the political echelon led by Prime Minister Netanyahu made its decision, the forces were deployed — the inner rings of Israel Police personnel were under the command of the Acting District Commander — and carried out the evacuation without the use of force. The [Israel Police] forces went up to the site without demonstration dispersal means and ordered the Palestinians to leave the area. Some left voluntarily, others required our assistance to be evacuated. The evacuation was carried out without injuries. All were put on vehicles and evacuated to Kalandia, where they were handed over to the Palestinian Authority.

“This was a clean operation, which started at 02:00 and was over by 04:00. There is now a force guarding the site, including the tents. As soon as we receive an additional order from the Supreme Court, because the issue is currently under discussion, we will continue — of course — to evacuate the tents, should such an order be received.”

At the next court hearing, Israel will have to explain why the tents should be removed, said Mohammed Nazzal, a Palestinian Authority official involved in the legal proceedings.

Palestinian activists told The Associated Press they wanted to “establish facts on the ground” to stop Israeli construction in the area, borrowing a phrase and a tactic, usually associated with Jewish outposts in the region.

In a separate incident over the weekend, the Israeli military said soldiers shot at a Palestinian who “tried to infiltrate” from Yehuda and Shomron. The IDF said soldiers called on the man to stop, then fired warning shots in the air, and finally fired at his legs when he refused to stop.

Palestinian police said he later died of his wounds.