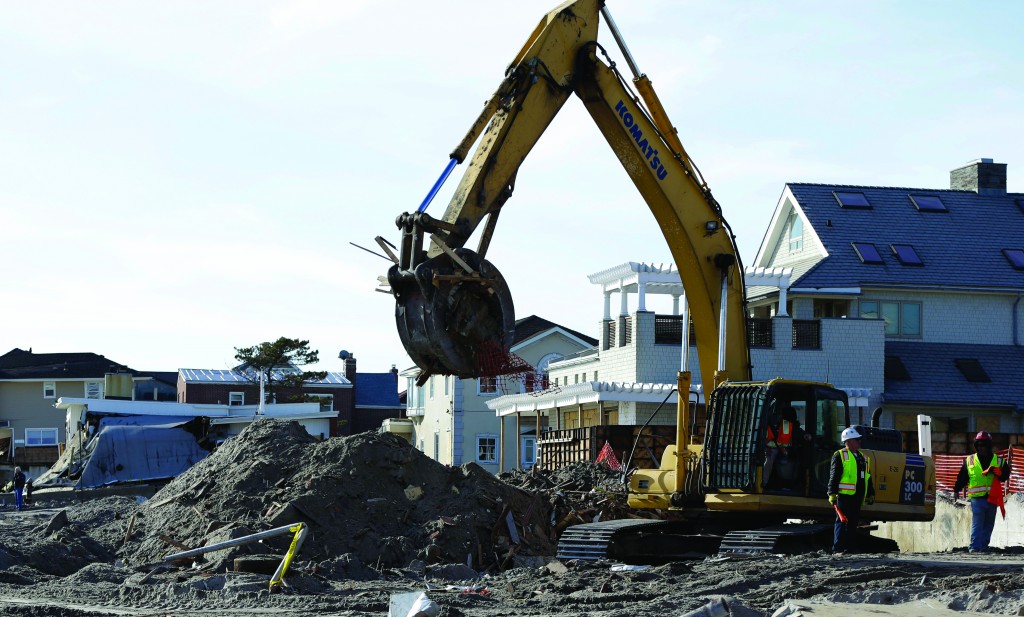 Conservatives and watchdog groups are mounting a “not-so-fast” campaign against a $50.7-billion Superstorm Sandy aid package that Northeastern governors and lawmakers hope to push through the House this week.

Their complaint is that lots of the money that lawmakers are considering will actually go toward recovery efforts for past disasters and other projects unrelated to the late-October storm.

A Senate-passed version from the end of the last Congress included $150 million for what the Commerce Department called fishery disasters in Alaska, Mississippi and the Northeast, and $50 million in subsidies to replant trees on private land damaged by wildfires.

The objections have led senior House Republicans to assemble their own $17-billion proposal, which will be brought to the floor by the House Appropriations Committee. Northeast lawmakers will have a chance to add $33.7 billion more.

House Speaker John Boehner intends to let the House vote on both measures. He’s responding both to conservatives who are opposed to more deficit spending, and to Govs. Andrew Cuomo (D-N.Y.) and Chris Christie (R-N.J.), who are irate that the House hasn’t acted sooner.

Critics are taking the sharpest aim at $12.1 billion in the amendment for Department of Housing and Urban Development emergency block grants. Any state struck by a federally declared major disaster in 2011, 2012 or this year would qualify for the grants, and that’s just about all the states, said Stephen Ellis, vice president of Taxpayers for Common Sense, a budget watchdog group. Only South Carolina, Arizona and Michigan would not qualify.

“That’s not a bad chunk of change, particularly if you are trying to get other lawmakers to vote for the bill,” Ellis said.

State and local governments like block grants because they provide more flexibility in how the money is spent. The money can go toward a variety of needs, including hospitals, utilities, roads, and rent subsidies.

“A lot of the money goes to government agencies to rebuild rather than helping people actually afflicted by Sandy,” Ellis said.

A $60.4-billion storm aid package passed by the Senate in December included $188 million for an Amtrak expansion project with an indirect link to Sandy. Officials say that new, long-planned tunnels from New Jersey to Penn Station in Manhattan would be better protected against future flooding.

The Club for Growth, a conservative group, complained the Senate bill was overpriced, full of pork, and would swell the federal deficit because other government programs weren’t being cut to cover the costs of the legislation. That bill expired with the old Congress on Jan. 3. So whatever additional aid package the House passes would have to go back to the Senate for its approval.

“An emergency funding bill should focus on the emergency needs of the victims, not the needs of politicians,” said Indiana Sen. Dan Coats, the senior Republican on the Senate Appropriations subcommittee on homeland security. Coats’ scaled-back $23.8-billion Sandy aid bill was rejected by the Senate.

Republicans also criticized $13 billion in the Senate bill for projects to protect against future storms, including fortification of mass-transit systems in the Northeast and building new jetties in vulnerable seaside areas.

The basic $17 billion before the House on Tuesday is aimed at immediate Sandy recovery needs, including $5.4 billion for New York and New Jersey transit systems and $5.4 billion for FEMA’s disaster aid fund.

It includes the block grants for previous disasters, weather forecasting improvements, and measures to minimize damage in future storms, but not the $188 million for the Amtrak expansion.

“We know it’s going to be a heavy lift for the $33 billion, but we’ll find the votes,” said Rep. Michael Grimm (R-N.Y.), whose Staten Island district was heavily damaged by Sandy.