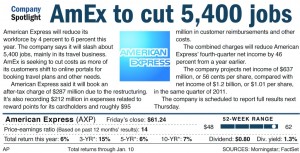 Flu Season Puts Businesses And Employees in a Bind

WASHINGTON (AP) – Nearly half the 70 employees at a Ford dealership in Clarksville, Ind., have been out sick at some point in the past month. It didn’t have to be that way, the boss says.

“If people had stayed home in the first place, a lot of times that spread wouldn’t have happened,” says Marty Book, a vice president at Carriage Ford. “But people really want to get out and do their jobs, and sometimes that’s a detriment.”

The flu season that has struck early and hard across the U.S. is putting businesses and employees in a bind. In this economy, many Americans are reluctant to call in sick, something that can backfire for their employers.

Flu was widespread in 47 states last week, up from 41 the week before, the Centers for Disease Control and Prevention said Friday. The only states without widespread flu were California, Mississippi and Hawaii.

LAS VEGAS (AP) – Microsoft may have relinquished its starring role in America’s gaudiest gadget show a year too early.

After 13 straight years in the spotlight, Microsoft’s decision to scale back its presence at this week’s International CES deprived the software maker of a prime opportunity to explain and promote a new generation of redesigned computers running its radically remade Windows operating system.

The missed chance comes at a time when Microsoft Corp. could use a bully pulpit to counter perceptions that Windows 8 isn’t compelling enough to turn the technological tide away from smartphones and tablets running software made by Apple Inc. and Google Inc.

WASHINGTON (AP) – The U.S. trade deficit expanded in November to its widest point in seven months, driven by a surge in imports that outpaced only modest growth in exports.

Still, the report showed consumers have maintained an appetite for spending.

WASHINGTON (AP) – The U.S. annual budget deficit is on track to reach $1 trillion for a fifth straight year, though government revenue jumped last month as people paid some taxes early to avoid higher rates in 2013.

The Treasury Department said Friday that the federal deficit grew by just $260 million in December. But for the first three months of the budget year, the deficit widened to $292 billion.

While the report covers other crops, attention has been focused on corn, which is widely used as an ingredient in many foods, provides feed for livestock and is mixed with gasoline as ethanol. The crop also was the hardest hit by the drought that settled in just as the plants were maturing.

NEW JERSEY (AP) – Drugmaker Merck & Co. is suspending its sale of the cholesterol drug Tredaptive after initial results from a study showed that it wasn’t effective and could raise the risk of some serious side effects.

The Whitehouse Station, N.J., company said Friday it is telling doctors to quit prescribing the tablets, which are not approved in the U.S., and it also is advising patients to stop taking the medication only after talking to a physician.

The drug is sold in about 40 countries. A company spokeswoman said Friday it will take a few months to implement the suspension worldwide.

This article appeared in print on page 9 of the January 14th, 2013 edition of Hamodia.