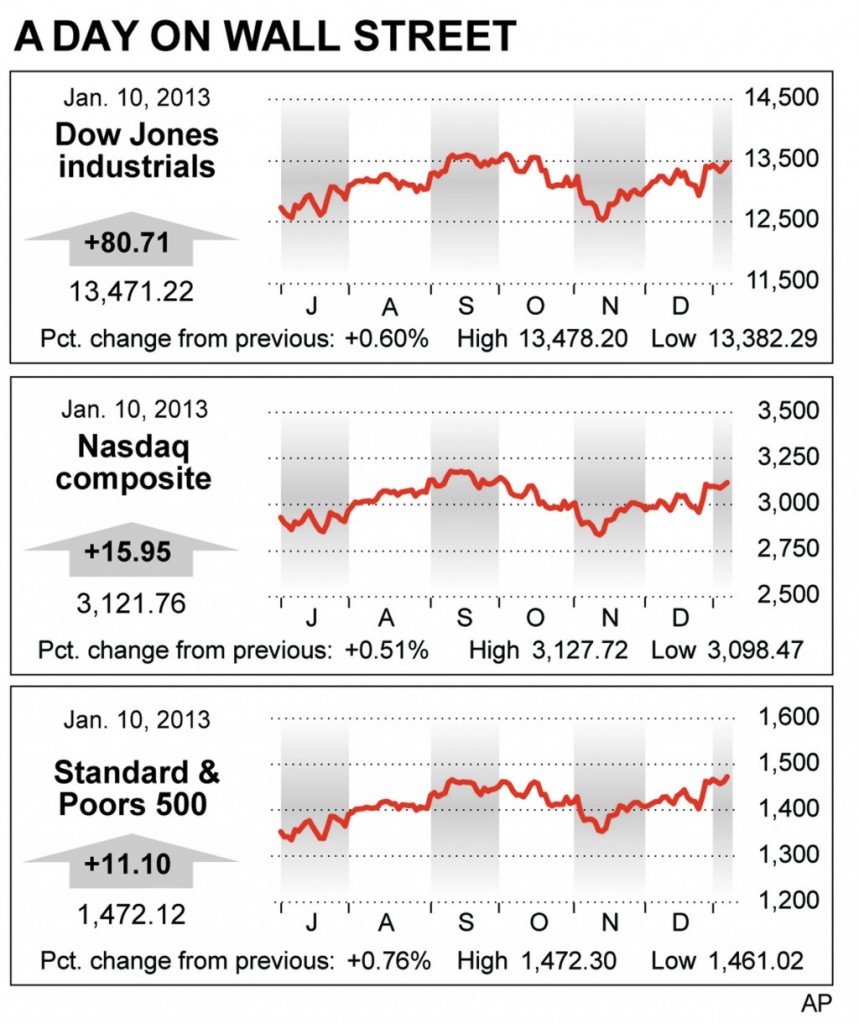 The Standard and Poor’s 500 closed at another five-year high Thursday after the stock market got a boost from reports suggesting the outlook for economic growth may be improving.

European Central Bank president Mario Draghi said the struggling eurozone should start growing again later this year, but he warned that the region has yet to reach a turning point in its struggle with recession and handling its government debt load. The comments bolstered expectations that the worst of the region’s crisis may be behind it.

Investors were also cheered by a report that showed China may gradually be emerging from its worst economic downturn since the 2008 global crisis. Export growth for the world’s second-largest economy rebounded strongly in December.

Stocks finished the day higher despite a U.S. government report that weekly applications for unemployment benefits ticked up last week. The Labor Department said applications rose 4,000 to 371,000, the most in five weeks. The previous week’s total was revised lower.

Ford was among the gainers, rising 36 cents, or 2.7 percent, to $13.83 after the company doubled its quarterly dividend to 10 cents, just nine months after paying its first dividend in more than five years.

U.S. companies are sitting on record cash piles, having rebuilt their balance sheets following the financial crisis that started five years ago. Analysts at Deutsche Bank predict that corporations will stop adding to those cash piles this year and instead start returning more cash to shareholders, helping push the S&P 500 up to 1,575 by the end of the year. That would be a 10-percent increase from where it ended 2012.

Traders are also waiting for more indications of the health of U.S. companies from earnings reports.

A good start this week to the earning reports for the fourth quarter of last year helped the market Wednesday after aluminum company Alcoa predicted rising demand for aluminum this year.

Investors will be paying particular attention to the outlook for company sales during this reporting period, said Quincy Krosby, a market strategist at Prudential Financial. Revenue growth slowed to 0.4 percent in the third quarter of 2012, compared to growth of 11.4 percent in the same period in 2011, according to S&P Capital IQ data.

“The third-quarter earnings season top-line revenue growth pulled back,” said Krosby. “That’s of concern because, when all is said and done, markets are supposed to be a reflection of company earnings.”

Supervalu Inc. rose 43 cents, or 14.1 percent, to $3.47 after announcing that it had reached a $3.3-billion deal to sell five of its biggest grocery chains — Albertsons, Acme, Jewel-Osco, Shaw’s and Star Market — to an investor group led by the private equity firm Cerberus Capital Management.

The S&P 500 is already up 3.2 percent so far this year after lawmakers reached a last-minute compromise to stop the U.S. from going over the “fiscal cliff,” a reference to sharp tax increases and across-the-board government spending cuts that could have pushed the economy back into recession.

Yet while the budget deal avoided many of the tax increases, it only put off the so-called sequestration, or spending cuts, that were part of the fiscal cliff threat.

“Everybody gave each other high fives, running up and down in Washington because they did the fiscal cliff, but the big deal is about to come and smack them upside their head — all the real issues that they didn’t want to deal with,” Schwarz said. “Most people are now thinking, ‘Better to be safe than sorry.’”

n Urban Outfitters rose $1.89, or 4.6 percent, to $42.64 after the company said that it had record sales for the two months ending in December.

n Jewelry retailer Tiffany & Co. sank $2.86, or 4.5 percent, to $60.40 after reporting that its sales increased at a slower pace than previously expected during the critical year-end shopping season. The company said its full-year earnings would come in at the low end of its prior forecast.