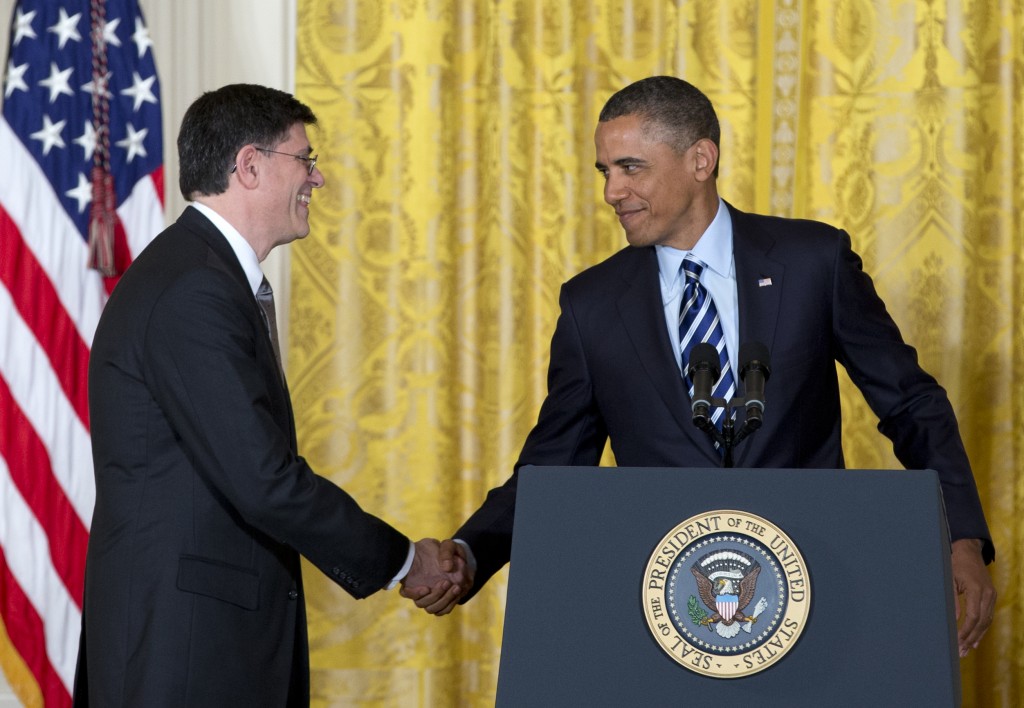 President Barack Obama nominated White House chief of staff Jack Lew to be secretary of the Treasury Thursday, declaring his complete trust in an aide with three decades of Washington experience in economic policy and a penchant for shunning the limelight. Lew is an observant Jew.

Obama announced his nomination in the ornate White House East Room, flanked by Lew and outgoing Treasury secretary Timothy Geithner. The two men and their backgrounds illustrate the nation’s changing economic landscape; Geithner, a longtime banking specialist with the Treasury and the Federal Reserve, took office in 2009 at the height of the nation’s financial crisis, and Lew, the budget expert, as the government struggles with its debt and deficit challenges.

Obama heaped praise on Geithner for addressing the Wall Street meltdown and shepherding an overhaul of financial regulations through Congress.

“When the history books are written, Tim Geithner is going to go down as one of our finest secretaries of the Treasury.”

Obama delighted in singling out Lew’s loopy signature, a distended Slinky-like scrawl that captured media attention Wednesday, joking that when he became aware of it he considered “rescinding my offer to appoint him.” If confirmed as Treasury secretary, Lew’s signature will appear on U.S. currency.

A year ago, almost to the day, Obama selected Lew as his chief of staff, taking him from his perch as director of the Office of Management and Budget into the White House’s tight inner circle.

In selecting Lew to replace Geithner, Obama not only picks an insider steeped in budget matters but also a tough bargainer. Some Republicans complain that Lew has been unyielding in past fiscal negotiations, particularly the failed talks for a large deficit reduction deal in the summer of 2011. Some have bristled at what they say is a greater desire by Lew to persuade them rather than negotiate.

If confirmed, Lew would assume the post in time for the administration to tangle anew with Republicans over a confluence of three looming fiscal deadlines — raising the $16.4 trillion federal borrowing limit, averting automatic spending cuts to defense and domestic programs, and the expiration of a congressional resolution that has been keeping the government operating. Those three events, if unresolved, would have a far greater negative effect on the economy than the “fiscal cliff” that Obama and Congress avoided a week ago.

Lew, 57, has often been described as a “pragmatic liberal” who understands what it takes to make a deal even as he stands by his ideological views.

One senior Republican senator, Alabama’s Jeff Sessions, voiced opposition to Lew. But while Lew may face a tough confirmation in the Senate, he’s not likely to encounter the type of stiff opposition that is already mounting against former Sen. Chuck Hagel, a Nebraska Republican whom Obama has tapped to be his defense secretary.