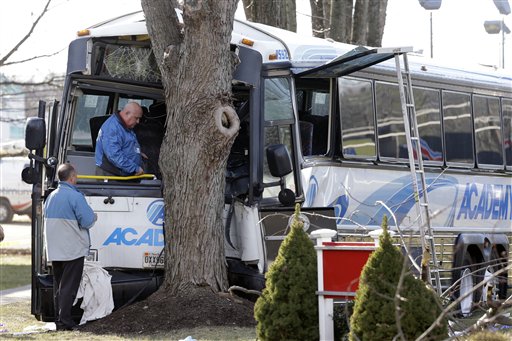 A New York City-bound commuter bus slammed into a mini school bus Thursday, flipping the school bus on its side and injuring more than a dozen people.

The school bus, which wasn’t carrying children, toppled onto a power supply station in front of an apartment complex. The commuter bus went off Route 9 and traveled another 60 yards before hitting a telephone pole and smashing into a tree.

At least 17 people on the commuter bus were injured, including the driver. The driver of the 24-seat school bus and a school aide suffered minor injuries.

Route 9 was closed for most of the morning, creating a massive traffic backup.

The 55-seat Academy bus was carrying 30 to 35 people, Old Bridge Township Police Capt. Robert Weiss said, and was driving on the right shoulder in a lane reserved for commuter buses.

The commuter bus driver, Daniel Jean-Pierre, a resident of Barnegat, has a clean driving record, company spokesman Joe Orlando said. He was seriously injured when his legs were pinned in the bus after it hit the tree, and he was airlifted to a New Brunswick hospital where he underwent surgery, Orlando said.

A female passenger on the Academy bus also suffered serious injuries and was airlifted to a hospital.

Chet Singh, a resident of the apartment complex, said he heard a loud boom and shattering noise and ran outside.

“I saw a huge bus with a tree sticking out of the front. People were screaming. They couldn’t get out of the bus.”

Passengers on the Academy bus opened emergency windows to escape, and rescue teams were able to pry open the front door.

Power to the apartment complex was initially cut off as a precaution and later restored. A sewage pumping system located near the power supply station was knocked out, and crews were working to restore it Thursday afternoon. By noon, workers had lifted the bus off the power station using a crane and loaded it onto a tow truck.