General Wall Street Gains as Earnings Flow In; Boeing Up

Stocks rose on Wall Street Wednesday after U.S. corporate earnings reports got off to a good start.

Having rallied after a last-minute resolution stopped the U.S. from going over the “fiscal cliff,” stocks are facing their first big challenge of the year as companies start to report earnings for the fourth quarter of 2012. Throughout last year, analysts cut their outlook for earnings growth in the period and now expect them to rise by 3.21 percent, according to data from S&P Capital IQ.

Early indications were decent. Aluminum maker Alcoa reported late Tuesday that it swung to a profit for the fourth quarter, with earnings that met Wall Street’s expectations. The company brought in more revenue than analysts had expected, and the company also predicted rising demand for aluminum this year as the aerospace industry gains strength. Alcoa is usually the first Dow component to report earnings every quarter.

Despite the better revenue number, Alcoa’s stock performance Wednesday was lackluster. It traded higher for part of the day then ended down 2 cents at $9.08.

Other companies fared better after reporting earnings. Helen of Troy, which sells personal care products under brands including Dr. Scholl’s and Vidal Sassoon, rose 2.7 percent, up 90 cents to $34.43 after reporting a 15 percent increase in quarterly net income.

Boeing was the biggest gainer of the 30 stocks in the Dow. It jumped 3.5 percent, up $2.63 to $76.76, following two days of sharp declines triggered by new problems for its 787 Dreamliner. Boeing said it has “extreme confidence” in the plane even as federal investigators try to determine the cause of a fire Monday aboard an empty Japan Airlines plane in Boston and a fuel leak at another JAL 787 on Tuesday. 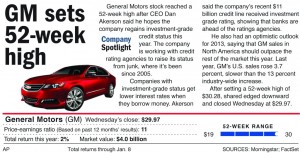