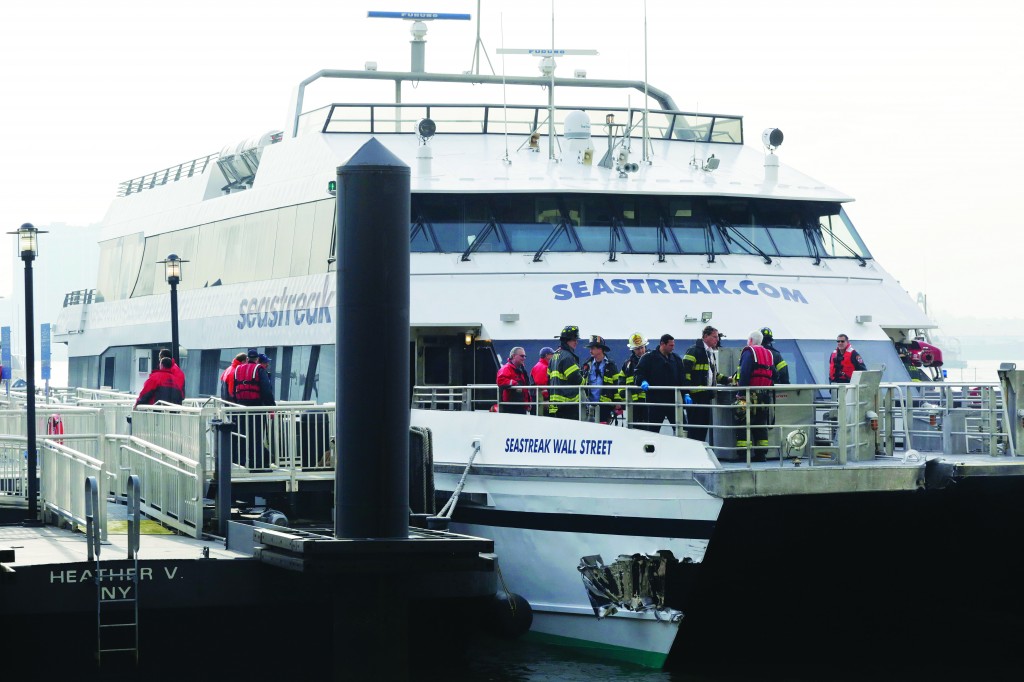 A high-speed ferry loaded with hundreds of commuters from New Jersey crashed into a dock in lower Manhattan on Wednesday during the morning rush hour, seriously injuring 11 people, including one who suffered a severe head wound falling down a stairwell.

Scores of people who had been standing, waiting to disembark, were hurled to the deck or launched into walls by the impact, which came after the catamaran Seastreak Wall Street slowed following a routine trip across New York Bay and past the Statue of Liberty, passengers said.

“We were pulling into the dock. The boat hit the dock. We just tumbled on top of each other. I got thrown into everybody else. … People were hysterical, crying,” said Ellen Foran, 57, of Neptune City, N.J.

The accident, which ripped open a small part of the hull like an aluminum can, happened at 8:45 a.m. at a pier near the South Street Seaport, at Manhattan’s southern tip. Around 70 people suffered minor injuries, and for nearly two hours paramedics treated bruised and dazed passengers on the pier. Firefighters carried several patients on flat-board stretchers as a precaution. Others left in wheelchairs.

The cause of the accident was under investigation. The ferry, built in 2003, had recently undergone a major overhaul that gave it new engines and a new propulsion system, but officials said it was too soon to tell whether they played any role in the crash.

Dee Wertz, who was on shore waiting for the ferry, saw the impact. She said that just moments before it hit, she had been having a conversation with a ferry employee about how the boat’s captains had been complaining lately about its maneuverability.

“He was telling me that none of these guys like this boat,” she said. “It was coming in a little wobbly. It hit the right side of the boat on the dock hard, like a bomb.”

The ferry company, Seastreak LLC, issued a statement saying it would work with investigators to determine the cause of the accident.

“Our thoughts and prayers are with those that were injured,” the company said.

People answering the phone at Seastreak’s offices in New Jersey referred questions to a lawyer, who did not immediately return phone messages.

About 330 passengers and crew members were aboard the ferry, which had arrived from Atlantic Highlands, a part of the Jersey Shore still struggling to recover from Superstorm Sandy. Passenger Frank McLaughlin, 46, whose home was filled with 5 feet of water in the storm, said he was thrown forward and wrenched his knee.

“We come in and do this every day and so it just kind of glides in,” he said. “It came in hard, and it was just a huge impact as we hit.” Some passengers were bloodied when they banged into walls and toppled to the floor, he said.

New York City’s transportation commissioner, Janette Sadik-Khan, said the ferry was coming in at 10 to 12 knots, or about 12 mph, when it collided with one slip and then hit a second.

After the impact, the boat was able to dock normally. Wertz, who saw the crash from the dock, said passengers raced off once the ramp was down.

“I think people just wanted to get … off the boat as soon as they could,” she said.

Police said the boat’s crew passed alcohol breath tests given after the crash. The National Transportation Safety Board said it had sent investigators to the scene.

The Seastreak Wall Street has been in accidents before. Coast Guard records said the ferry hit a cluster of fender piles while docking in 2010, punching a hole in the ship’s hull. In 2009, it suffered another tear on the bow after another minor docking collision. No one was injured in either of those mishaps.

The naval architecture firm that designed the reconfiguration, Incat Crowther, said in an August news release that the ferry’s water-jet propulsion system had been replaced with a new system of propellers and rudders to save fuel costs and reduce pollution. The hull was also reworked and the ship made 15 metric tons lighter. At top speed, the ferry travels at around 35 knots, or 40 mph.

Ferry accidents happen every few years in New York. In 2003, 11 people were killed when a Staten Island Ferry crashed into a pier on Staten Island after its pilot passed out at the wheel. Three people were badly hurt and about 40 injured when the same ferry hit the same pier in 2010, because of a mechanical problem.