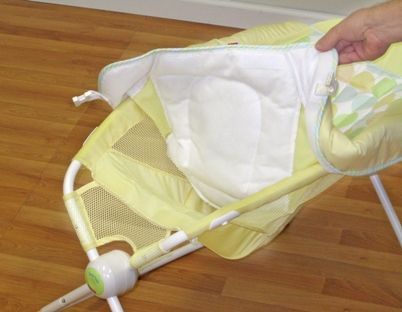 The government is warning consumers to inspect Fisher-Price Newborn Rock ’N Play Sleepers due to risk of exposure to mold for infants who use them.

The Consumer Product Safety Commission said Tuesday that its warning applies to 800,000 infant recliner seats, called sleepers, that were sold at stores nationwide and online since September 2009, with prices ranging between $50 and $85. The seats, designed for babies up to 25 pounds, feature a soft plastic seat held in a tubular metal rocking frame. The product has a removable fabric cover.

Mold can develop between the removable seat cushion and the
hard plastic frame if the sleeper remains wet or is infrequently cleaned, the agency said. Mold is associated with respiratory illnesses and other infections, the warning said. Fisher-Price has received 600 reports of mold and 16 infants have been treated for respiratory issues, coughs and hives after they were in the Fisher-Price sleepers.

The agency said consumers should check for dark brown, gray or black spots that can indicate the presence of mold under the removable seat cushion. If mold is found, they are advised to immediately stop using the product and to contact Fisher-Price for cleaning instructions or further assistance.

Units currently in retail stores are not affected by the warning, but mold growth can occur after use of the infant sleepers.