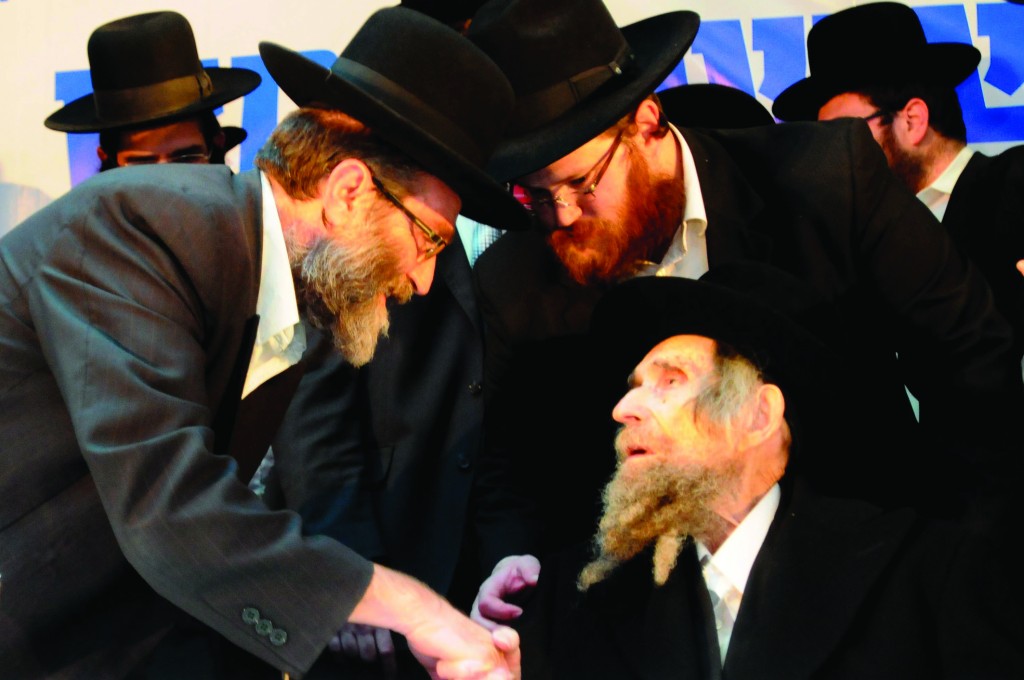 Gedolei Yisrael are saying that the upcoming elections in Israel are crucial for chareidi Jewry, no less than a matter of life and death.

The upcoming elections are critical for chareidim in Eretz Yisrael.

Though similar sentiments have been expressed in previous election years, this time it’s different. Gedolei Yisrael aresayingit’s a matter of life and death for Yiddishkeit; the Gerrer Rebbe, in calling for everyone to vote for United Torah Judaism, said, “It is now a danger for Yiddishkeit.”

Not that previous elections were smooth sailing, but in the past the challenges appeared to have solutions within reach. Today, the picture is totally different: All accepted agreements concerning the chareidim have been dashed by the secular regime, in total disregard for the arrangements set by all previous governments.

“Every election is serious,” says UTJ MK Rabbi Yaakov Litzman, “but I don’t remember such a critical time as now. The chareidim are facing difficult decisions, the most serious we have faced in the past 60 years.”

Rabbi Litzman adds that while Eretz Yisrael merited the building of Torah empires, with tens of thousands of talmidim studying Torah day and night, the army draft issue is now hitting the chareidi community head on.

For the past 60 years, since the establishment of the State of Israel, chareidim were allowed independence in education, army recruitment and other issues, but now all these critical issues are being questioned.

Rabbi Litzman notes that while we are not talking about drafting all bachurim — that would chas v’shalom be an impossible situation — the issue has to be sorted out legally. In order to do that, the chareidi world needs strong representation in the next Knesset.

Another issue is that of funding for Torah institutions.

“The funding of our mosdos is perhaps in even more danger than the [status of bachurim vis-à-vis the army],” sighs Rabbi Litzman. “We have so many enemies in the government system who won’t miss an opportunity to cut the budget of the yeshivos and the material support of the Torah world.”

Rabbi Litzman says the next Knesset will see difficult budget battles that will require strong representation to fight off more cuts to the child allowance paid by the National Insurance Institute. The stronger the chareidi party is, the better the chances of winning these battles.

Gedolei Yisrael: We Are In Danger!

Gedolei Yisrael are not mincing words about the dangers. “There is a fire, Hashem yerachem!” declared Harav Aharon Leib Steinman, shlita. “One cannot say, ‘What does it have to do with me?’ and remain complacent. If a bachur is not permitted to learn, what will become of him? What will happen to Klal Yisrael?”

At his speech to United Torah Judaism (UTJ) party activists in Ohr Yehuda, Rav Steinman quoted a letter from Harav Yosef Shalom Elyashiv, zt”l, saying that “someone who refrains from voting is giving support to those who seek to destroy everything.” The Rosh Yeshivah added, “Jews are responsible for one another in both private and public affairs.

“Elections are the time when we can achieve things and save the situation for the sake of the Torah world, save whatever we can for the sake of Klal Yisrael,” Harav Steinman said, repeatedly stressing the obligation of all members of the chareidi community to work for the campaign and to vote for UTJ.

Concluding his remarks, the Rosh Yeshivah warned that those who do not vote “transgress the Torah prohibition of lo saamod al dam rei’echa — do not stand by as your brother’s blood is shed.”

The Belzer Rebbe, shlita, underlined the significance of the upcoming elections, saying that “the basis of Judaism is dependent on the present election.”

The Vizhnitzer Rebbe, shlita, Harav Yisrael Hager, stated that this election campaign “will be especially fateful for our children.”

Harav Dovid Cohen, Rosh Yeshivah, Yeshivas Chevron, said that the upcoming elections are a matter of life and death. “Today, we face unprecedented dangers …. This is a war of life and death — and we must win,” Harav Cohen warned. “The war at present is for our lives. We have no allies.”

The Rosh Yeshivah criticized the apathy some have shown regarding the present election.

“The heart aches at the public indifference of some,” he added. “This indifference may, chas v’shalom, harm the strength of chareidi representation. We must remember that for us this is a sacred obligation, and not an issue of interests or seats….”

In the last Knesset, the chareidi MKs, by working together on all fronts, succeeded in thwarting the passage of dozens of anti-religious laws, from civil marriages to protecting the funding of Talmudei Torah. These successes were only possible thanks to the votes and efforts made four years ago, which are once again urgently needed.

UTJ MK Rabbi Moshe Gafni, who chaired the influential Knesset Finance Committee, summarized the battles that took place in the outgoing Knesset, including the prevention by chareidi MKs of the passage of laws relating to yeshivah student enlistment, national service for religious girls, recognition of the Reform movement, and giving “rabbis” of the Zohar organization the authority to perform marriages.

But the battles in the next Knesset will be even harder, Rabbi Gafni continued, and every chareidi Jew must feel responsible.

“In future years people will ask what happened in 5773,” he said. “You knew there would be harsh decrees, you knew that a war was being waged against Torah study and practical Torah observance. ‘You knew,’ our grandchildren will say to us. ‘What did you do in 5773? It was in your hands. You could have stopped the process and prevented decrees.’”

UTJ MK Rabbi Yisrael Eichler agrees, saying that the chareidi public is unaware of the existential threat to the education of its children.

“If we neglect this election battle, we will have to fight in the streets for the right to learn Torah and to teach our children in the Talmudei Torah and yeshivos, before fighting for an apartment and demonstrating against employment discrimination,” Rabbi Eichler cautioned.

Speaking at a UTJ election convention in Nir Etzion, Rabbi Gafni said the upcoming election will be very close, with the entire political map hinging on a few Knesset seats, adding that this underscores the importance of every single vote.

Rabbi Eichler backed this view, saying the army-draft laws will be decided by a single mandate, placing the responsibility for the fate of Torah in the country on those who refrain from voting.

“The responsibility for critical decisions, such as whether Jews will be arrested or harmed by the secular government trying to draft Torah students, as well as the closure of Talmudei Torah, will fall on them,” he said.

The ability to separate from the secular street, which is the foundation of pure chareidi chinuch, is in danger, says Rabbi Eichler. Only a strong chareidi party will have the ability to obtain the government funding necessary to keep the community’s institutions autonomous.

Historically, financial distress and religious disaffection have gone hand in hand, notes Rabbi Eichler. Thus, both before the founding of the state, and in its early years, when the chareidim lacked financial support while the secular enjoyed prosperity, cha­ reidi youngsters left the fold.

Similar was the fate of chareidi youth in pre-World War II Europe, where the Enlight­ enmentflourished, he says.

Will the coming four years chas v’shalom repeat history? That depends on the chareidi vote and how much effort the community puts into the election campaign.

Currently, the government does not recognize religious education — either yeshivah learning or Bais Yaakov post-high school seminary degrees — for the purpose of obtaining employment, while irrelevant academic degrees are recognized. This is simply to force the chareidim to integrate, Rabbi Eichler says.

The only way to preserve the chareidi way of life is by voting for the chareidi party and helping the campaign wherever needed.

How the Prime Minister Stays Popular

Rabbi Eichler argues that it has become much more difficult for chareidi Jewry to identify its adversaries and know how to fight them. These days, opponents may not openly fight the chareidim, but instead send all chareidi-related issues to the High Court, where the chareidim are doomed from the start.

All the secular parties share one goal — to “integrate” the chareidim.

Experts say that Prime Minister Binyamin Netanyahu would prefer a government without chareidim, if possible. If UTJ does not get enough electoral support, the chareidim will find themselves outside the government just like in 2003, when Ariel Sharon opted to form a government with the extremist antireligious Shinui party — because it had two more seats than UTJ.

“You are completely oblivious to the gehinnom the Likud has put us through,” Rabbi Gafni told an election conference last week.

Rabbi Eichler says that Netan­ yahu is not now against the chareidim, just as he was not pro-chareidim before. The only thing that has changed is the media, naturally followed by public opinion.

Until several years ago, it was popular to declare, “We love Jews,” “My children sing Adon Olam,” and,“I’m on my way to the Rabbanim,” and the prime minister acted accordingly. But the trend has changed, and it is now popular to call for chareidi recruitment, for integration of chareidim educationally, and for cutting the meager funds given to the chareidim.

Eichler adds that Israel is being threatened with war from Iran and a third intifada from Hamas, the Palestinian Authority has received U.N. recognition and Israel is practically blacklisted by most countries, yet Netanyahu seems to have only one problem — the chareidim.

Netanyahu has stressed that the larger his Likud party emerges from the elections the greater the likelihood it can implement reforms in many areas, including housing, the system of government, and, of course, sharing the burden — which means, among other things, drafting yeshivah students.

During this past term, the Likud-led government did not support the chareidim during the debacle in Emmanuel or when the secular media raged over “discrimination against women.” And when it came to the Tal Law regarding deferred army service for yeshivah bachurim, the government zigzagged at every possible crossroad, while pouring fuel on the media fire of anti-chareidi sentiment.

Now that Netanyahu has united with Avigdor Lieberman, the situation is even worse. In media interviews, Lieberman has repeat­ edly said that the government must be secular, and free of “parties that are not nationalist-Zionist,” meaning chareidi parties.

When Likud-Beiteinu was formed, Likud members celebrated, seeing this as an opportunity to “create equality in service.”

If the secular camp understands that the chareidi issues are indeed more important than Israel’s other woes, says Eichler, how can the Torah world not see it?

On the agenda are Torah study, the chareidi housing crisis, army enlistment, chareidi chinuch, Talmud Torah and yeshivah funding, and much more.

Next week be”H we will present the views of other political parties in Israel.