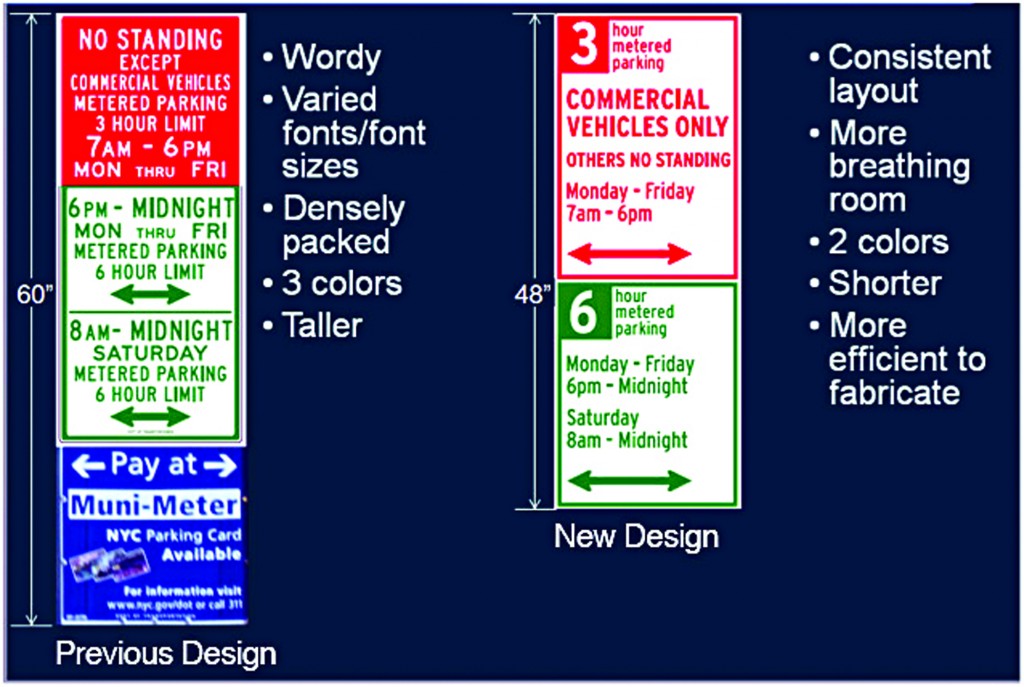 Yaakov parked his car in what he thought was a safe zone and ran a quick errand, but when he returned to his car he discovered a $95 ticket. He was unaware that he had parked in a spot zoned only for commercial vehicles at that time of day. The sign that informed him of this rule was ten feet away and very high up. There was no appeal from the city’s point of view; he paid the fine.

The incidence of such “gotcha” moments may decrease, at least in the borough of Manhattan, now that the New York City Department of Transportation unveiled on Monday newly-designed and simplified parking regulation signs in Midtown’s commercial parking areas.

The signs, which are easier to see and read, replace 6,300 parking regulation signs of varying colors, typefaces, font sizes and sometimes confusing phrasing with streamlined and standardized two-color signs that are phrased and formatted for easier readability.

“New York City’s parking signs can sometimes be a five-foot-high totem pole of confusing information,” said Commissioner Sadik-Khan. “Parking signs play an important role in setting the rules at the curbside and these changes will make regulations easier to read and take the stress out of figuring out where and when you can legally park.”

“You shouldn’t need a Ph.D. in parking signage to understand where you are allowed to leave your car in New York,” said Council Member Garodnick. “The days of puzzled parkers trying to make sense of our midtown signs are over. I was pleased to work directly with DOT, removing unnecessary words in these signs, cleaning up their appearance, and the result is a simple, clear product that people will understand.”

The simplified signs will be located throughout Manhattan’s paid commercial parking areas, generally from 60th Street downtown to 14th Street and from Second to Ninth Avenues, with additional areas in the Upper East Side, Lower Manhattan and the Financial District.

The 6,300 signs that DOT will replace in Midtown and Lower Manhattan include 3,300 commercial parking signs and 3,000 other signs for nighttime and weekend parking for the general public, hotel and taxi stands, street cleaning and no-standing zones.

The new signs are less visually cluttered and lower down. The new design also places the day of the regulation before the hours of the regulation, eliminating abbreviations and retaining all necessary parking information while making it easier to read.