The Standard & Poor’s 500 closed at its highest level in five years Friday after a report showed that hiring held up in December, giving stocks an early lift.

The index began its descent from a record close of 1,565.15 in October 2007 as the early signs of the financial crisis began to emerge. The index bottomed out in March 2009 at 676.53 before staging a recovery that has seen it more than double in value and move to within 99 points of its all-time peak.

The remarkable recovery has come despite a halting recovery in the U.S. economy as the Federal Reserve provided huge support to the financial system, buying hundreds of billions of dollars’ worth of bonds and holding benchmark interest rates near zero. Last month the Fed said it would keep rates low until the unemployment rate improved significantly.

“Without the Federal Reserve doing what they did for the last few years, there would be no way you’d be near any of these levels in the index,” said Joe Saluzzi, co-head of equity trading at Themis Trading. “I would call this the Fed-levitating market.”

Stocks have surged this week after lawmakers passed a bill to avoid a combination of government spending cuts and tax increases that have come to be known as the “fiscal cliff.” The law passed late Tuesday night averted that outcome, which could have pushed the economy back into recession.

The Labor Department said U.S. employers added 155,000 jobs in December, showing that hiring held up during the tense fiscal negotiations in Washington. It also said hiring was stronger in November than first thought. The unemployment rate held steady at 7.8 percent. 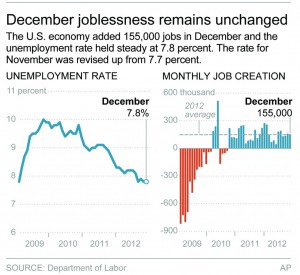 The jobs report failed to give stocks more of a boost because the number of jobs was exactly in line with analysts’ forecasts, said JJ Kinahan, chief derivatives trader for TD Ameritrade.

Among stocks making big moves, Eli Lilly and Co. jumped $1.84, or 3.7 percent, to $51.56 after saying that its earnings will grow more than Wall Street expects, even though the drugmaker will lose U.S. patent protection for two more product types this year.

Walgreen Co., the nation’s largest drugstore chain, fell 61 cents, or 1.6 percent, to $37.18 after the company said that a measure of revenue fell more than analysts had expected in December, even as prescription counts continued to recover.

Stocks may also be benefiting as investors adjust their portfolios to favor stocks over bonds, said TD Ameritrade’s Kinahan. A multiyear rally in bonds has pushed up prices for the securities and reduced the yield that they offer, in many cases to levels below company dividends.

Goldman Sachs reaffirmed its view that stocks “can be an attractive source of income,” and warned that there is a risk that bonds may fall. In a note to clients, the investment bank said that an index of AAA-rated corporate bonds offers a yield of just 1.6 percent, less than the S&P 500’s dividend yield of 2.2 percent.

The 10-year Treasury note fell, pushing its yield higher. The yield on the 10-year note fell 2 basis points to 1.91 percent. The note’s yield has now climbed 52 basis points since falling to its lowest in at least 20 years in July.

This article appeared in print on page 8 of the January 7th, 2013 edition of Hamodia.