Business Airlines’ Plans For 2013 Up In The Air
Business 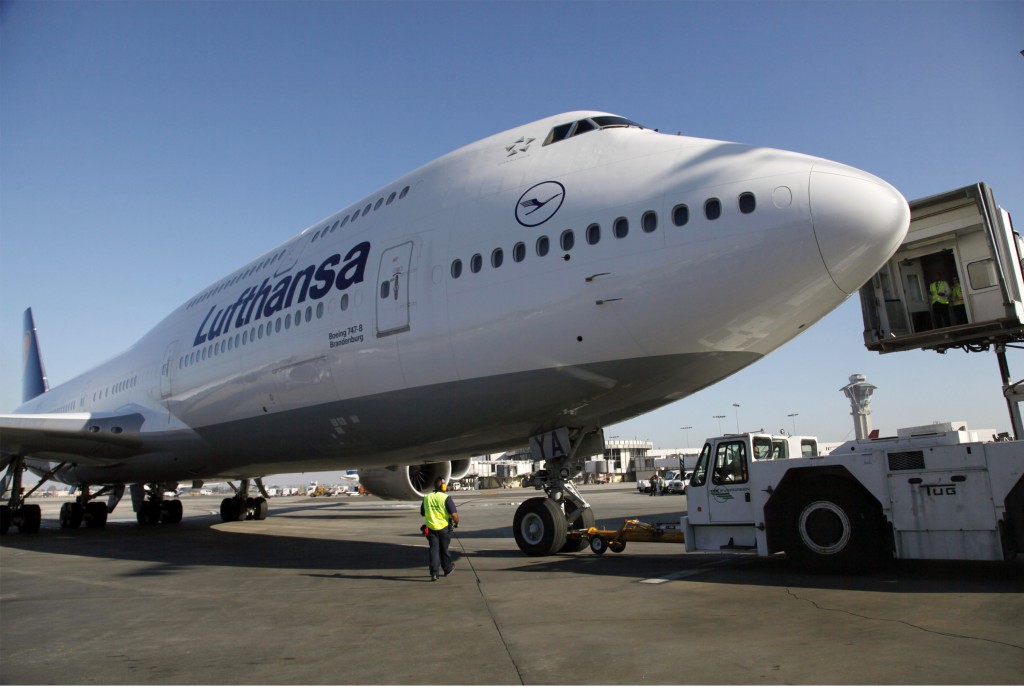 Airfares will be on the rise in 2013, and those niggling airline fees will metamorphose into optional bundles of services.

Meanwhile, onboard amenities, such as Internet access, entertainment options and refreshed interiors, will abound among U.S. carriers, but tight seating in coach probably won’t improve.

And 2013 might be the year you’ll finally be able to keep your smartphone, iPad or Kindle turned on during takeoffs and landings.

Those are some of the predictions airline industry experts foresee in the new year. Here’s the lowdown on fares, fees and flight experience for 2013.

“I wouldn’t be surprised to see airfares rise like they did this year, between 3 and 6 percent domestically,” Seaney said. That’s because airlines will succeed in properly balancing supply and demand by trimming the number of seats they offer to match “decent, but bordering on tepid, demand.”

Fares are typically driven by four main factors: competition, most of all, then supply, demand and oil prices. “If you look at those drivers, they are, for the most part, on the airlines’ side, which gives them pricing power,” Seaney said.

That doesn’t mean there won’t be good airfare deals on some flights on some routes. And consumers will still see lower prices during off-peak days, such as Tuesday, Wednesday and Saturday departures and off-peak seasons, such as late January and early February. Like this year, summertime fares probably will stay relatively high, he said.

Airline mergers can also affect fares, and a huge one could take place early in 2013. American Airlines and US Airways are in talks about combining.

The general consensus among consumer advocates is that airline mergers aren’t good for passengers.

“Any time you have two big airlines merging, that means consumers have less choice and competition is reduced, which only translates to higher prices,” said Charlie Leocha, director of the Consumer Travel Alliance.

However, a bit of new evidence bucks that conventional wisdom. Despite four mega-mergers in the U.S. airline industry during the past seven years, fares have not increased significantly, just 1.8 percent per year, according to a December report from professional services firm PwC. In fact, average domestic fares decreased 1 percent from 2004 to 2011 when inflation is factored in, the report found.

Fliers know full well, however, that the fare isn’t all that counts nowadays. There are those fees.

Fees Get A Makeover

The most noticeable trend in recent years with airline fees is that there are more of them: fees for checked bags, aisle seats, onboard meals, among many others.

“What we hear is that people pay their fare and get to the airport and feel they’re constantly being nickeled-and-dimed to death for things that used to be included,” said Kate Hanni, founder of FlyersRights.org.

The top five U.S. carriers alone generated more than $12 billion in fees in 2011, with even more expected through 2012, according to the PwC report.

What consumers call fees, airlines call “unbundling” _ making a la carte choices from services that used to be included in the fare.

A likely trend for 2013 might be called “rebundling,” airlines packaging a few now-optional services and charging for a tier of service.

“The airline industry is in a period of transition regarding the pricing of its products,” said Jay Sorensen, president of IdeaWorks, an airline consultant. “Airlines will offer fare products, such as basic, basic-plus and comfort, and allow consumers to purchase their desired level of comfort.”

American Airlines kicked things off in December by introducing packages of airfare upgrades available on round-trip flights. For example, its Choice Essential tier will get you a checked bag, priority boarding and no fee if you need to change your flight reservation. It costs a flat $68 extra per round trip. Its next tier, for $88, includes those perks plus a 50 percent frequent-flier mileage bonus, same-day flight change, same-day standby and a premium beverage, such as an alcoholic drink onboard.

“It’s sort of back to the future,” Seaney said. “It’s taking those unbundled bundles and putting them back in the fare, so you don’t have this perception of nickel-and-diming.”

Another issue that could see action early in 2013 is transparency on all those airline fees.

The Department of Transportation is considering forcing airlines to display optional fees alongside airfares everywhere tickets are sold, so consumers can make an apples-to-apples evaluation of fares.

Fares must already be displayed, including mandatory fees, such as taxes and airport fees. But now, many seemingly basic services are optional, such as checked bags or booking an aisle or window seat.

“We are hoping it addresses this idea of transparency with all these hidden fees,” Hanni said.

“You have absolutely no idea how much the sandwich is going to cost or whether they put a credit card slot on the bathroom,” she joked. “We’re not saying, don’t have ancillary fees. Just show us what they are.”

Leocha predicted that consumers “are going to win a partial victory.” He thinks the DOT will require that at least baggage fees and seat-reservation fees be clearly stated when consumers are shopping for fares.

“We are OK with partial fee disclosure – of the fees that used to be part of the airfare in the old days, such as seat-reservation fees and baggage fees,” Leocha said. “The other fees need to be disclosed on the airlines’ websites, but those are not fees that will impact whether or not you will take a flight, like pillows and blankets, food, extra legroom.”

It was about a year ago that actor Alec Baldwin was kicked off a plane before takeoff in Los Angeles. He reportedly refused to halt his smartphone playing of “Words With Friends,” an electronic word game like Scrabble.

Baldwin and the flying public might get good news during 2013.

The Federal Aviation Administration will be reviewing its policy that forces passengers to turn off their portable electronic devices, such as smartphones, laptops, tablet computers and e-readers, during takeoffs and landings – technically, below 10,000 feet.

Pressure in Washington is mounting.

In December, both the Federal Communications Commission and Sen. Claire McCaskill, D-Mo., urged the FAA to finally allow electronic devices during takeoffs and landings. McCaskill, a member of the Senate committee with jurisdiction over communications and aviation policy, points out the “absurdity” of the ban, especially given the FAA now allows pilots to use iPads to replace their paper flight manuals in the cockpit.

“The current rules are inconvenient to travelers, don’t make sense and lack a scientific basis,” McCaskill said in a statement, adding that she is “prepared to pursue legislative solutions should progress be made too slowly.”

It’s an open secret that many people don’t turn off their phones and portable devices when told to on a plane, Seaney said. “The bottom line is that if it was dangerous, they would confiscate your phones as you got on the plane,” he said.

Hanni said she was “almost positive” the FAA in 2013 will pave the way for use of electronics below 10,000 feet. “The FAA will be laughed at for making this a big deal for so many years,” she said. “It’s just stupid.”

Use of wireless phones or other electronics for voice calls is not being considered in that FAA review, and experts say it doesn’t have the same support _ on Capitol Hill or among passengers who would be annoyed by a seatmate speaking loudly on what some call their “yellular” phone.

Inside the aircraft cabin, passengers during 2013 will continue to see significant changes. Many airlines will be taking delivery of new planes, while others are upgrading cabin interiors.

“Finally, after over a decade, airlines are going to spend some capital,” Seaney said. “You saw a little bit of it (in 2012), you’ll see a lot more of it in 2013, taking delivery of new aircraft – not to expand their fleet but to replace what’s there.”

Mary Kirby, editor-in-chief of Airline Passenger Experience magazine, said 2013 will be “quite an exciting time.”

Onboard connectivity is an example.

While Wi-Fi has been available on many domestic flights for a while, the difference in 2013 will be seeing more airlines offering connectivity on trans-Atlantic flights, which require Internet access via satellites rather than ground towers.

“That’s actually quite important,” Kirby said, because passengers are disconnected for so many hours on long-haul flights.

For example, American Airlines has said its new Boeing 777-300ERs, scheduled to start flying early in 2013, will have satellite Wi-Fi. And United Airlines and Delta Air Lines also plan to outfit more planes in 2013 with it.

“Other carriers are going to follow suit,” Kirby said. “Passengers in America can start expecting U.S. carriers to start offering Wi-Fi on long-haul flights, including over the Atlantic and, increasingly, down to South America and eventually trans-Pacific as well.”

Another trend is not so welcomed. Some airlines, in an effort to maintain profits, are stuffing more seats onto planes, offering less legroom and elbow room in economy class – even on longer, international flights.

For example, United’s new Boeing 787 Dreamliner planes are quieter and offer many cabin comforts, but the airline chose to place nine seats across in economy class, making for less personal space than Boeing envisioned with eight seats across. Similarly, American’s new 777-300 will have a tight configuration of 10 abreast in coach.

“We’re going to be squeezed in tighter than ever before in long-haul aircraft,” Kirby said. Passengers can “suck it up” in a tight seat during a flight of just a few hours, but flying 10 or 14 hours that way “changes the whole comfort equation entirely.”

Of course, airlines have started to offer extra inches for extra cost. Offerings for premium economy seats, with a little more legroom, will continue to expand in 2013, she said.

“Airlines know this is something they have to do because there are so many road warriors flying in economy class,” Kirby said. “For those of us who need to work on flights, it’s pretty essential to have a little extra room, so we can pull out that laptop.”

However, most major U.S. airlines use the same actual seats as economy-class with the same number of seats across, so you don’t get a more comfortable cushion and often you don’t get more width, either, she said.