The Jewish world mourned a revered Torah leader on Tuesday, with the sudden petirah of the Sadigura Rebbe, Harav Avrohom Yaakov Friedman, zy”a, a member of the presidium of the Moetzes Gedolei HaTorah of Agudas Yisrael and the oldest Rebbe of the Ruzhiner dynasty. He was 84.

The Rebbe was renowned as a Torah scholar and served for decades as a Rosh Yeshivah before succeeding his father as Rebbe.

He was born in Vienna, Austria, on 5 Elul 5688/1928. His father was the Knesses Mordechai of Sadigura, Harav Mordechai Shalom Yosef, zy”a, and his mother was Rebbetzin Mira Reizel, a”h, daughter of Harav Yisrael Shalom Yosef Heschel, the Mezhibuzher Rebbe, z”ya. The Chortkover Rebbe, Harav Yisrael, zy”a, served as sandak at the bris.

When the Rebbe was five years old, the family moved back to Pshemishel, Poland.

In Adar 5699/1939, when the Knesses Mordechai traveled to Eretz Yisrael for a visit, his uncle, Harav Yisrael, the Rebbe of Husyatin, who had emigrated there several years earlier, instructed him not to return to Europe. That Elul, weeks before the outbreak of World War II, Rebbetzin Mira Reisel and her 11-year-old son, Avraham Yaakov, left Europe for Eretz Yisrael.

There the young boy basked in the presence of his father, who was also his Rebbe and mentor and with whom he had an extraordinarily close relationship.

When he turned 13, he merited that his great-uncle, the Husyatiner Rebbe, zy”a, put his tefillin on him. The Husyatiner Rebbe also led a special l’chaim tisch in honor of the simchah. For the rest of his life, the Rebbe would speak about his uncle often and with great awe and longing.

From his early childhood his hasmadah was clearly evident, and to his final day his life revolved around Torah study. He was a close talmid of Hagaon Harav Reuven Tropp, and later of Harav Yehoshua Menachem Ehrenberg, the Dvar Yehoshua, from whom he later received semichah.

At the age of 18 he began to study Kabbalah as well, and even recently, he still had a chavrusa every Friday for several hours in kisvei Arizal.

In 5713 (1953) he married Rebbetzin Zipporah, a”h, the daughter of Harav Yosef Aryeh Feldman, z”l. She was niftar six years ago.

Three years later his father decided to move to the United States, where he established a court in Crown Heights. Among his father’s ardent chassidim was the Skulener Rebbe, zy”a, and Hagaon Harav Gedaliah Schorr, zt”l.

In 1965 the Rebbe moved to Eretz Yisrael, where he established the Ruzhiner Yeshiva in Bnei Brak and served as Rosh Yeshivah. His father also moved back to Tel Aviv. 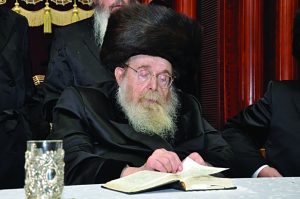 He went to great efforts to preserve Shabbos in Tel Aviv, and spread much Torah to the Tel Aviv residents, bringing light to all his surroundings.

In 1995 the Rebbe began to suffer from a serious illness, but refused to allow his physical limitation to interfere with his avodas Hashem. He continued leading his Chassidus, giving brachos, inspiration and counsel to his followers, and saying divrei Torah. in 2005, he moved his court to Bnei Brak.

“My father taught me how to read a kvittel,” the Rebbe once related. “He taught how to read what is written, as well as between the lines.”

A ben acher ben from the Ruzhiner Rebbe and the Maggid of Mezeritch, the Rebbe was constantly quoting divrei Torah from his ancestors.

A strong supporter of Jews settling in Yehudah in Shomron, he traveled to those areas to give chizuk to the people living there. Following the disengagement from Gaza, he did all he could to be mechazek the Gush Katif evacuees.

The Rebbe was an active and enthusiastic supporter of Agudas Yisrael.

Only last week the Rebbe ordered his gabbai to announce in his beis medrash the obligation to vote for the UTJ party in the upcoming elections. There were those who raised an eyebrow at his early declaration, being the first to call for voting for UTJ when the elections were more than a month away.

Only after his petirah did they realize why the Rebbe had been so quick to make the announcement.

Recently the Rebbe contracted pneumonia, and on Tuesday morning his condition deteriorated. Hatzolah members, who were called to the Rebbe’s home, rushed him to Mayanei Hayeshua Hospital in Bnei Brak after he lost consciousness, yet despite the doctors’ efforts, the Rebbe was niftar, as family members recited Vidduy and said Shema Yisrael.

The levayah began at the Sadigura beis medrash in Tel Aviv, and from there proceeded to the Sadigura beis medrash on Rechov Guttmacher in Bnei Brak at 1:30 p.m., with the attendance of the Rebbes of the Ruzhiner dynasty, shlita — the Boyaner Rebbe, the Bohusher Rebbe, the Kapishnitzer–Yerushalayim Rebbe and the Vosloier Rebbe, as well as Hagaon Harav Aharon Leib Steinman, the Vizhnitzer Rebbe, the Toldos Avraham Yitzchak Rebbe, Harav Baruch Dov Povarsky, the Sanz-Klausenberger Rebbe of Eretz Yisrael, Tel Aviv Chief Rabbi Harav Yisrael Meir Lau, and thousands of mourners.

The levayah then proceeded to the Ruzhiner Yeshiva in Bnei Brak. The Rebbe was buried in the Ruzhiner chelkah of the Nachalat Yitzchak cemetery. Shortly before the kevurah, the Rebbe’s will was read, in which it instructed that his only son, Harav Yisrael Moshe Friedman, Rav of Beis Medrash Sadigura, Golders Green, should immediately succeed him as Rebbe.

This article appeared in print on page D1 of the January 2nd, 2013 edition of Hamodia.